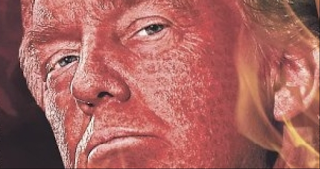 For the first time in a very long time I went to bed politically happy and woke up even happier. Because last night’s staggering Alabama Senate victory by Democrat Doug Jones over Roy Moore is further proof that we are experiencing America’s comeback. Finally. It’s been two years since Donald Trump’s venomous poison was fanged into the nation’s bloodstream. Alabama’s the anecdote.

Little did Trump know that his “Make America Great Campaign” was something he’d be unwittingly achieving after he first turned the country to shit. Of course, America was already great when the Manbaby-in-Chief took office. And then, just like that, it wasn’t. It quickly became the headquarters of ignorance, hate and misguided white nationalism. We became the sad joke around the world.

But now the “I alone” president is single-handedly uniting the country, just not in the way he planned: against him. He’s bringing together an unlikely patchwork of Northeners, Southerners and those on both coasts. Blacks, Hispanics, whites, Jews, Christians, Muslims, immigrants, women, gays, the disabled, the college educated, blue-collar workers, athletes, rich, poor, young and old are linking arms in the war against the most tone-deaf, provocative, destructive president in history. And the collateral damage we’re seeing to Trump, his administration, his party, his family and his business is swift and merciless. And it’s only getting worse.

The “I alone” president is now truly alone. Trump’s popularity flirts with the 20’s, and I‘m betting he’ll see single-digits before we see the leaves return in Spring. Our allies across the globe, the intelligence community, the judiciary and the media loathe him. He’s even losing critical elements of his base, including white men and college educated women. And if he thinks last night’s devastating blow isn’t going to be the subject of intense conversation today between Mitch McConnell and Paul Ryan, he’s more delusional than we think. Those two spineless, soulless clowns now have a clear window into their future, and it ain’t pretty. They will surely soon turn on him and cut their proverbial losses.

Alabama now has a Democratic Senator for the first time in a quarter century. Let me repeat that: there’s an Alabama Democrat going to the United States Senate. Trump likes to brag that no other president has done so much in his first eleven months. He’s right. Turning ‘Bama blue is an unprecedented accomplishment. You’ve gotta be truly incompetent as a Republican to lose the reddest state in the nation.

Having failed in prior endorsements of critical special-election candidates, including Ed Gillespie in the Virginia Governor’s race, and Luther Strange, who lost to Moore in the primary, Trump showered his venomous support on the disgraced former judge and accused child-molester Moore, who embarrassingly rode into the voting booth yesterday on a horse, and fittingly ending the day a humiliated horse’s ass.

To be sure, Jones’s stunning victory has created an earthquake of anger, fear, panic and desperation in the White House. There’s a perfect storm on the horizon that’s scaring the shit out of Trump. He’s got Robert Mueller’s special RussiaGate investigation devouring him from within. He’s got 20 angry, sexually-harassed women seeking revenge. And he woke up to the terrifying reality that he’s now political Kryptonite and the poster-child for widespread failure.

Trump faces a mountainous uphill battle going forward. Everyone with even a half a brain knows he’s woefully unfit for the presidency and must be removed before he does further harm, and causes death and physical destruction. He’s become a friendless island in a sea of haters. I suspect even his kids and Boy Wonder Jared Kushner are contemplating jumping ship. The only wall he’s truly built is the one between him and everyone else. And it’s rapidly closing in on him.

The floodgates of condemnation have opened. Consider USA Today, which this morning published an unprecedented blistering, no-holds-barred editorial smackdown of Trump and his massive shortcomings:

"A president who would all but call Sen. Kirsten Gillibrand a whore is not fit to clean the toilets in the Barack Obama Presidential Library or to shine the shoes of George W. Bush. This isn't about the policy differences we have with all presidents or our disappointment in some of their decisions. Obama and Bush both failed in many ways. They broke promises and told untruths, but the basic decency of each man was never in doubt.

The end is near for Trump and his poisonous cocktail of bigotry and intolerance. It’s just a matter of time.