Hey Democrats, You Wanna Get Rid of Trump? Here's How... 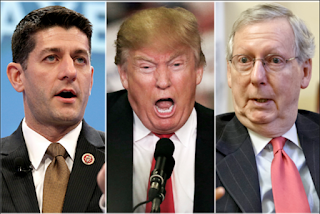 Talk to any Democrat and two things are certain to be heard: (1) “I hate Donald Trump” and (2) “we’re banking on Robert Mueller to take him down.” While special prosecutor Mueller’s RussiaGate investigation may ultimately prove collusion and/or obstruction of justice, the very likelihood is that this Republican-controlled Congress is simply gonna say, “Hey thanks Bob, we’ll take it all under advisement”...and then walk away and throw the file in the trash. So my advice to Democrats is simple: don’t bank on Mueller, Congress or anyone but yourselves. Just vote. Voters have all the power.

The blue tsunami that’s been crashing against special-election shorelines should give Democrats more than just hope. It’s a very strong indicator of massive voter anger, enthusiasm and engagement, all of which could result in a landslide next November. Stunning victories in Washington, New Jersey, Virginia and Alabama have created sheer panic in the GOP. And even where Democrats lost, i.e. Kansas, Georgia and South Carolina, the margins have been shockingly small compared to prior elections, giving the left momentum in states where they normally wouldn’t have a shot in hell. Even by conservative estimates, it’s already looking pretty bleak for the GOP and we still have another ten months of Crazytown.

To be sure, it’s quite possible Trump could be impeached, removed through the 25th Amendment or he could resign. We might even see indictments for him and his family. But assuming justice will be served this way is not just ill-advised and impractical, it could shatter bleeding liberal hearts from coast-to-coast.

Democrats cannot control what happens to Trump within the highly complicated, bureaucratic and politically-charged legislative and judicial landscape. But they can effect tremendous, historic change by simply getting out the vote. The beauty of America’s Democracy is that when those curtains are drawn at the polling booth, everyone is equal. The division of power is split evenly across all socioeconomic and racial groups. It’s the only day of the year when janitors and billionaires have the exact same clout and influence.

Take Alabama, the reddest state in the nation which turned blue for the first time in 25 years, which proved how incredible our Democracy can be when voters take their responsibility and power seriously. Doug Jones’s Senate victory was fueled in large part by an Election Day swarm of women, blacks, millennials, college grads and suburbanites. Throw in Hispanics, gays, independents and fed-up moderate Republicans (i.e folks like MSNBC’s Joe Scarborough) and a Democratic landslide in next year’s midterms seems quite plausible. To say it’ll be a referendum on Trump and his deplorable elitist swamp-dwellers is a gross understatement.

“Vote for us...give us back control of Congress...and we’ll undo the damage caused by Donald Trump and the Republican Party. We’ll reverse the massive tax cuts for the rich and for corporations, and increase those for the poor and middle class. We’ll preserve, protect and improve the Affordable Care Act. We’ll restore the Children’s Health Insurance Program (CHIP). We’ll pass DACA and protect dreamers...and pass humane immigration reform which creates a path to citizenship for 12-million people who came to our shores with hope of a better life. We’ll increase funding for the EPA, invest in renewable energy and get America back in the Paris Climate Agreement...making us the world’s leader on climate change again....

...”We’ll protect the human and civil rights of women, minorities and gays, while taking a firm stand against intolerance and bigotry from Neo-Nazis, white supremacists and those who seek to spread hatred. We’ll investigate and punish all sexual harassers and sexual abusers in a zero-tolerance policy. We’ll enforce existing laws and legislate new ones to further protect women and men and also make them safer in coming forward when they’ve been violated...”

...“We’ll stop the Courts from turning completely conservative. We’ll stop corporate deregulation. We’ll provide critical oversight on this out-of-control, dangerous Trump administration. We’ll protect the truth, the rule of law and our free and open press. We’ll respect and support our independent judiciary and the brave patriots who serve our country in the FBI and in the intelligence community...”

...“We’ll ensure that Russia’s meddling in our elections, and its future cyber-attacks to undermine our Democracy, is fully investigated without impediment, and we’ll hold those accountable, including the president, if there was collusion and/or obstruction of justice....

...“And we will ensure that no soldier is sent into battle—in Iraq, Iran, North Korea or elsewhere—unless it’s an absolute last resort after diplomacy and all other efforts have failed....

...”Most important, we will restore America’s standing in the world. Earn back the respect, admiration and source of inspiration that’s been squandered in this reckless, undisciplined administration...

...“The Republican Party is the face of Donald Trump, Roy Moore and billionaires. The choice is yours...”

Now think of what the #GOP’s basic message will be:

“Donald Trump is innocent. Our GOP-controlled Congress has been highly effective. We’ve been really great for you but you’re just too stupid to recognize it. And it’s the media’s fault you don’t like us or our highly unpopular policies. The rich need more. And you will pay for it. And you’ll see how great that is for you. We’ll sexually-harass and abuse you and then shamelessly protect the predators. We’ll stop giving away free stuff to those lazy black people. And oh...brown people are dangerous, which is why we need to build physical walls and diplomatic barriers around us to keep ‘em all out. And those homosexuals...SCARY! We’ll keep them away from you too! MAGA!”

My money’s on the left.

So listen up, Democrats. Stop fantasizing of the day you see Trump taken away in handcuffs because Super MuellerMan is gonna save the day. Focus instead on the more tangible, direct power you have. The power of your vote. The absolute power no amount of lies, deceit and spin can take away from you. You wanna see Trump impeached? You wanna put an end to this 1950’s-era backward ugliness? Do everything humanly possible to ensure that Democrats win both the House and Senate next year. Alabama is just the tip of the iceberg. The way things are going with Trump and the GOP, it’s conceivable the entire nation could turn blue.

And as Election Day approaches next year, please remind every Democrat you know of what happened in Virginia this week: Republicans lost control of the state legislature for the first time in 17 years because of one single vote. Just one vote can change government. Every...vote...counts.