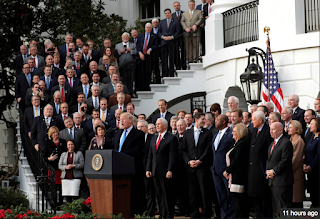 As 2017 draws to a close, the major takeaway from this non-traditional ‘honeymoon’ year for President Donald Trump can be summarized by a more potent political toxicity and a deepening of America’s racial divide.

In the past year we’ve witnessed Trump’s blatant, shameless race-baiting and racism. This includes reviving his birther campaign; his outrageous Charlottesville behavior; continued enabling and/or outright defending Neo-Nazi’s, white supremacists, David Duke and the KKK; attacks on black NFL players; disrespecting a black Gold Star mother and widow; and his insensitivity over black victims of police brutality and his general disdain for the Black Lives Matter movement. And let’s not forget his attacks on immigrants, Muslims, Hispanics and Mexicans.

This week we had front row seats to Trump’s virtually all-white, all-male White House masturbatory tax bill celebration, which highlighted his and the GOP’s utter glee in shafting the poor, middle class, sick, elderly and minorities so the rich and corporations could get tremendous permanent tax-cuts that neither they or the economy need. It shined a blinding spotlight on the massive diversity problem of this administration and the Republican Party.

The statistics are staggering. While 37% of Democrats in the House and Senate are non-white, that number falls to under 5% for the GOP. And while the Democratic Party continues to broadening its tent even further, all of the GOP’s freshman Congressmen this year are white.

The story doesn’t change much when it comes to gender. Women comprise 37% of Democratic Senate seats and only 10% of Republicans’. Same for the House, where women hold a third of the Democrat seats while less than 9% are Republican.

Diversity in Trump’s administration is equally lacking. Just 17% of cabinet members are non-white. And just 20% are women. By comparison, the numbers for men of color or women jump to 64% and 45% in Barack Obama's and George W. Bush’s initial cabinets respectively. Making matters worse, most of Trump’s Summer interns were white, as are 90% of his Federal judicial nominees, the highest in decades, according to the Associated Press. Just 20% of his judicial appointments have been women.

In short, while America is getting more diverse, and while the Democratic Party is reflecting this ethnic and gender evolution in its House and Senate caucuses, the Republican party just keeps getting whiter and dude-r. And in the process, the needs of minorities and women, and the injustices committed against them every day, are being increasingly ignored, and worse, enabled.

To be sure, the Republican Party has a major problem on its hands, as evidenced by the stunning results of several recent special elections. There’s a reason why 98% of black women who voted in the Alabama Senate election voted for the Democrat, Doug Jones. And it’s not because they, or an overwhelming majority of minorities, feel at home in the GOP.

All of which spells trouble for the Republican Party in next year’s midterm elections. The latest polling indicates a massive blue wave that’s sweeping across the nation. Americans, by a 56%-38% margin, say they prefer Congress to be controlled by Democrats. This momentum to the left is fueled in large part by minorities, women, gays, independents, college-grads, millennials, seniors and suburbanites.

Coupled with Trump’s abysmal and rapidly declining approval numbers, this shift in voter sentiment could result in a Democratic landslide come November. No wonder the GOP leadership is in a state of panic.