Why I'm Rooting For Trump to Fail 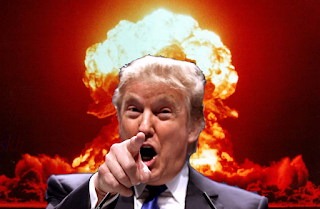 Traditionally, it’s been every American citizen’s patriotic duty to support the United States president whether or not we agree with his basic policies. We’re taught that when it comes to domestic prosperity and security and our standing globally, we must put country before party and root for the Leader of the Free World to succeed. Because rooting against the president is tantamount to rooting against America. Not anymore.

After Donald Trump’s first year in office there’s been a political paradigm shift of epic proportions. No longer are we simply on different sides of the social, economic and foreign-policy spectrum. It’s no longer just about our opposing views on taxation, size of government and nation-building, for example. For the first time in our nation’s history, we have a president who presents a grave danger and existential threat to America. To every American man, woman and child. And to citizens of allied nations.

With every move, every speech, every tweet, Trump systematically discredits and subverts our democracy. He maligns and undermines our independent judiciary, intelligence community and free press. He is a Baghdad Bob-worthy pathological liar and propagandist who fancies America as a state-run government which therefore makes him the state. He has a fundamental disdain for the Constitution and the rule of law. He’s a home-grown oligarch who’s testing the boundaries of authoritarianism.

But the most chilling element to Trump’s presidency is his seemingly deteriorating mental state. His massive insecurities and need for constant attention, praise and flattery leads to decidedly unpresidential behavior that is impulsive, undisciplined, immature, undiplomatic and provocative. These emotional shortcomings have left him compromised and exploited by a devious enemy operative like Russian president Vladimir Putin, who’s attacked our electoral system with shocking impunity and threatens to do so again.

Trump’s questionable state of mind has resulted in him calling the leader of an enemy state, North Korea’s Kim Jong Un, “short and fat” as he also nonchalantly threatens nuclear war.

It’s not unreasonable to imagine Trump sending our sons and daughters to die in battle, or having San Francisco obliterated, simply because someone like Kim pissed him off that day. Or that he needs to Wag the Dog-like diversion given his abysmally low popularity and because special prosecutor Robert Mueller’s independent RussiaGate investigation is approaching the Oval Office door.

To be sure, it’s always been about Trump and only Trump. The lives and deaths of our citizens are just props in his twisted, alternate-reality show.

He is, simply put, very, very bad for America. And it’s getting worse.