The Stable Genius and His Executive Time 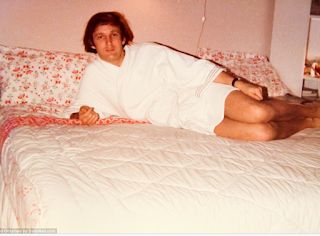 It was a wild and crazy first year for President Donald Trump. Much of his 2017 had been spent defending against accusations of sexual assault, collusion with Russia, obstruction of justice, money laundering and excessive golfing. And 2018 has gotten off to an even worse, more bizarre start.

In the wake of Michael Wolff’s bombshell tell-all book “Fire and Fury,” Trump now finds himself having to defend against damaging statements from top aides that he’s “stupid,” a “moron,” “mentally unstable” and “unfit for office.”

“Actually, throughout my life, my two greatest assets have been mental stability and being, like, really smart....I went from VERY successful businessman, to top T.V. Star to President of the United States (on my first try). I think that would qualify as not smart, but genius....and a very stable genius at that!”

Later in the day he stood with Republican leaders at Camp David and doubled-down on the bragging:

“I went to the best colleges, or college. I went to — I had a situation where I was a very excellent student, came out and made billions and billions of dollars, became one of the top business people. Went to television and for ten years was a tremendous success, as you probably have heard. Ran for president one time and won.”

Well for one thing, anytime you have to publicly assert that you’re mentally stable, the likelihood is that you’re not. And what’s with the “like” before “smart?” Is the president not really sure? Or, is this just another example of the United States president sounding like a 13-year-old? And, exactly how many colleges did he attend? He seems confused. Lastly, 2016 was not his first attempt at running for the presidency. He actually tried once before in 2000. It failed.

Keep in mind all of this occurred just days after the “I know words...I have the best words” stable genius misused the word “misnomer” when downplaying his relationship with former chief strategist Stephen Bannon:

Clearly, “misnomer” is not one of his “best words.”

And judging from Trump’s tweets and public comments over the past couple of years, the argument can easily be made that he is most definitely not stable.

Then there’s the explosive revelation which came Sunday in an Axios scoop about Trump’s shrinking work schedule. The administration which gave us “alternative facts” now artfully redefines sleeping, tweeting, watching TV, phoning pals and lounging around the White House residence half a day (or more) as “executive time.” As his presidency’s progressed, Trump has fewer meetings during the day and spends much less time in the Oval Office (typically 11am-6pm), Axios reported.

Given how little he appears to be working Monday through Friday, coupled with 90+ weekend days playing golf at his resorts, it’s fair to assume he has a general disdain for the job; has zero appreciation for policy and his role both domestically and abroad; and is utterly indifferent to his impact (or lack thereof) on America’s standing in the world. How his detachment both scares our allies and emboldens our enemies.

It’s a chilling reality to accept, but for the first time in its 241-year history America, in effect, has an absentee president. It is leaderless.
Posted by The Ostroy Report at 5:07 PM