WTF Has Happend to the Republican Party? 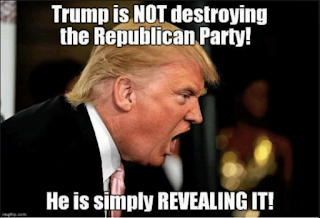 Imagine Satan rising from the flaming depths of hell, plowing his fiery red hands right through your chest and ripping your heart out. Imagine him wrapping his scorching lips around your entire head and sucking out your soul. Welcome to the 2018 Republican Party. It's the walking dead.

If the GOP's iconic standard-bearer Ronald Reagan were alive today he'd be aghast over what's happened to his beloved party. It would be utterly unrecognizable to him.

Why on Earth would Mitch McConnell and Paul Ryan willingly sleep with the devil over Donald Trump? Why are they so loyally protecting an ignorant, sexist, racist, sexual-abusing, pathologically-lying sociopath traitor who presents the greatest threat in history to our democracy and whose vile, dangerous, anti-American behavior runs counter to everything they supposedly stand for?

Seriously guys, what the fuck has happened to you?

When exactly was the point when you decided, "Yeah, it's ok if Vladimir Putin attacks us, meddles in our election, undermines our democracy, creates utter chaos and toxicity, pits Americans against each other and turns us into a laughingstock shithole of a nation...just as long as we get our Supreme Court justice, our tax reform, corporate deregulation and a disintegration of Obamacare."

The GOP once stood for a strong defense, national security and unwavering patriotism.

The GOP was once a staunch, unapologetic protector of the rule of law and the Constitution.

The GOP was once the party of "values." A party that, at least publicly, advocated against corruption and sin. Strong proponents of family and faith...even though behind closed doors many in its ranks led controversial, scandal-plagued double-lives.

But that was yesterday's Republican Party.

Today's GOP is complicit in the greatest political perversion in our history. It's shamelessly enabling Trump's moral, ethical and perhaps criminal assault on America. Allowing the 'kompromised' United States president to subvert our 242-year-old principles and imperil our national security and freedoms. Supporting a likely Traitor-in-Chief who's empowered our enemies while alienating our allies. Who's isolated us on the world stage. Who's stripped us of our leadership role on trade, the environment, immigration and human/civil rights.

Today's GOP has not just allowed Trump's abuses of power, but is using the levers of government as a partisan tool to fuel and provide cover for them.

Today's GOP stands idly by as Trump wages an unrelenting and ill-founded war on the media, our free and open press and our freedom of speech.

Today's GOP shares his utter disrespect and disdain for our independent judiciary, the intelligence community and the FBI.

Today's GOP has condoned Trump's blatant, pathological lying, his unprecedented reshaping of reality and the truth, and his willful misrepresentations to the American public.

Today's GOP, rather than fulfill its oversight role as a co-equal branch of government, has become Trump's henchmen, carrying out his dirty deeds with reckless abandon.

Today's GOP has watched Trump incredulously refuse to implement sanctions against Russia that it passed in virtual bi-partisan unanimity.

Today's GOP has allowed Trump to roll up the Constitution's Emoluments Clause like a cone and shove it up their collective assess.

Today's GOP, rather than preparing Trump's Articles of Impeachment, is instead rolling out the authoritarian red carpet. Allowing him to turn us into a kleptocracy and a banana republic.

Perhaps the biggest question is not what the Russian's might have on Trump, but what he has on Congress.
Posted by The Ostroy Report at 2:07 PM