No, Trump is NOT 'Presidential' 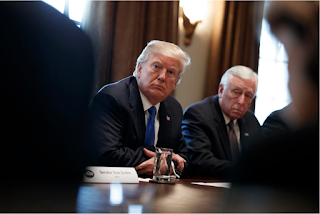 He sat for 45 minutes and behaved himself. He didn’t fidget much. He seemed reasonably focused, despite his typically short attention span. He appeared interested in what others had to say. He didn’t meander or ramble on about unrelated subjects. He was a bit confused at times and didn’t seem too knowledgeable about the subject matter, nor did he have any particular opinions. And he didn’t get nasty, call anyone names or bully anyone. He actually got along nicely with the others. No, this isn’t from a 12-year-old’s report card. It’s about the President of the United States.

The media, as they’ve done before whenever Donald Trump manages for a few minutes not to sound like a bloviating buffoon, went ga-ga over this suddenly “presidential” president as he presided over a clearly staged video-opp to steer the narrative away from amped-up allegations of mental instability.

Pardon me if I’m not impressed. After a week where Trump bragged about the size of his “nuclear button” and defended himself as a “stable genius,” are we supposed to now feel comforted because the Leader of the Free world can run a fucking meeting? That’s it? Have we dropped his bar so low that ants could dance the limbo under it?

CNN quoted unnamed sources after the meeting as saying it was a carefully orchestrated attempt at damage control in the wake of Michael Wolff’s explosive tell-all book “Fire and Fury: Inside the Trump White House” in which 100% of staff and aides interviewed believe Trump is mentally unfit to serve as president.

Well, can’t have the nation think he’s batshit crazy, right? So Trump (more likely Chief of Staff John Kelly) invited Republicans and Democrats over to ostensibly discuss immigration reform, Deferred Action for Childhood Arrivals (DACA) and border security. But within minutes it became clear that the most powerful human in the world, who wants to “do DACA” and “do bi-partisan,” didn’t bring a lick of vision to the table. And that leaders of both parties were being used as props.

It got downright bizarre at one telling moment when Trump appeared to agree with Sen. Diane Feinstein (D-CA), who suggested he commit to initially passing a “clean DACA bill” before ultimately moving on to broader immigration reform. He contradicted his prior position of insisting the initial bill also end “chain migration” and the current lottery system, as well as contain funding for his border wall, which rankled members of his own party:

“I have no problem...We're going to do DACA, and then we can start immediately on the phase two, which would be comprehensive. I think a lot of people would like to see that. But we need to do DACA first."

Nooooooo! House Majority Leader Kevin McCarthy, appearing as if he just shat his pants, immediately sprung into partisan action (God forbid the president might actually be allowed to agree on some level with a democrat) to remind Trump that this DACA-first plan is actually the exact opposite of what he wants and that it must include additional funding for border-security.

"I think that's what she's saying," Trump assured him, causing a desperate cross-current of clarification between stunned Republicans and their bewildered ‘send me any bill and I’ll sign it’ leader.

It was the best, most surreal theater I’ve seen since the “Pee-Wee Herman Show” hit Broadway six years ago.

And nothing material came from it except proof that the President of the Unites States can run a shitty meeting.

So please stop asking us to give gold stars to Trump just because he takes a momentary break from acting like a petulant teenager.

Please don’t insult us anymore with these utterly nauseating attempts to normalize the most unqualified president in American history.

Trump is not “presidential.” He’s never been presidential. And he never will be presidential. My 13-year-old daughter could’ve run that meeting, and she actually would’ve done a much better job at it. She has more maturity, conviction, intellectual curiosity and is more inspiring than the 71-year-old who occupies the Oval Office.

And that is terrifying.

Andy, this article of our “idiot in charge” trying to look presidential only lasted ONE day. Yesterday on the 11th he once again showed everyone he is unfit to be a human, much less the leader of this country. Calling Haiti, El Salvador and African nations “Shithole countries” is beyond belief, even for I’m sure some of his followers. When will these so called religious Republican voters, who love him no matter what, come to grips on who this person really is? When will this nightmare come to an end before we are all brought down into this Trump cesspool? It has been said, “This person is as dumb as a stump.” I think it is now fine to say, “This person is as dumb as a Trump.”