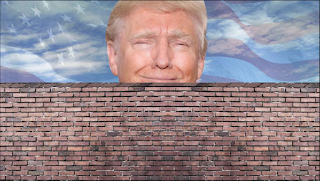 The wall. That damned wall. For two years Donald Trump has relentlessly promised it to his brainwashed, xenophobic base.

"MEXICO!" they'd hoot like convicts at a strip club.

And now Trump finds himself threatened with another government shutdown in two weeks over the budget, DACA and border security. He knows he's toast if he fails to deliver the wall to his disciples. The wall is as much a part of his DNA as the orange spray-tan that's leeched into his bloodstream. So he's standing firm. No wall, no DACA. But there's a simple solution.

Trump should just tell his base he got the wall. He doesn't need an actual wall. They'll believe him. They believe anything he tells them. They're so brainwashed they won't know the difference.

Here's the speech the Liar-in-Chief can give when a deal with Democrats is finally made:

"Good evening...
I am very bigly excited to announce we cut a deal. I mean I cut a deal. I alone. Me. All by myself. With the help of no one else. Just Trump. And it's a great deal. A lovely deal.
The best deal ever in the history of deals. Believe me. Anyway, we've avoided another shutdown. And we have a wall!

Let me tell you about our wall. It's big alright! And it sure as hell is beautiful! And get this...it's invisible! It uses this brand-new Israeli technology that makes things invisible to the naked eye. Ya gotta love the Jews! Are they smart, or what!?

Our wall... our big, beautiful 60-foot invisible wall... will keep out all those bad hombres trying to sneak across the border. It's like those invisible dog fences. You may not see it, but it'll zap the crap outta ya if ya touch it, believe me!

But be very careful, people. Very careful. If you're ever down there, ya know, by the Mexico/Puerto-Rico Texas border, don't get too close! You may wanna stick your hand out...touch it... see how it feels. Don't do it! It'll cook ya like a taco bowl! But trust me, it's there.

So, we won! WE WON! We beat the Democrats! We got the wall! And guess what? We also got Mexico to pay for it! They're paying in Bitcoin! It's what they call a 'crypto-currency.' The Winklevoss Twins invented it. I think they're Jews too. And if they're not, they worked for Mark Zuckerberg, and he's a Jew. So it's like the same thing. Anyway, I know, it's way confusing to you people because, like the invisible wall, you can't see the Bitcoin. But it's all there, believe me...

And when the media reports the truth, that there is actually no wall, Trump can simply accuse them of "fake news"...

And everything will be just fine.

The base will lap it all up.

And we can move on.

No more wall talk ever again.
Posted by The Ostroy Report at 10:51 AM