The State of the Union Speech Trump Should Deliver 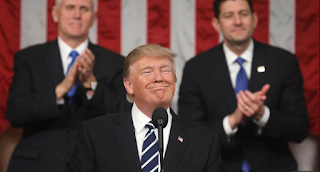 On the evening of January 30th President Donald Trump will enter the chamber of the United States House of Representatives and deliver his first State of the Union address to the 115th Congress. If history repeats itself, Trump will spend about an hour giving what will most likely be the most dishonest, fact-deficient, reality-challenged propagandistic speech in presidential history. But what if he actually spoke the truth...?

My fellow Americans. And Democrats. What a fucking year, huh!? Are ya exhausted yet?! I know I am! Despite what Doc Ronny...the physical...he said I’m in...ya know...the exam was incredible...but he’s full of shit. I’m in lousy shape. Just look at me. I’m blowing up more than Bitcoin! My diet is...I can tell you...I eat like shit, I don’t exercise—but I love golf...is it Saturday yet?—and I have more insecurities than an acne-ravaged teenager. I’m a hot mess, people, believe me! Ok, enough small talk. Let’s get this done. I have TV to watch.

Speaking of which...what idiot decided this speech should be named after “Fake Tapper’s” CNN show? So stupid!

So...America....let’s...it’s incredible what I’ve...no president has...never before have we....is anyone worse than Trump?! What a shithole I turned it into, huh? I hate this job! The pay sucks, I have to kiss Congress’s ass—although Kevin McCarthy brought me my favorite color Starbursts in a jar with his name on...WTF is up with that?!—and everybody’s watching me 24/7, so I can’t bang strippers and porn stars. I’m bored as fuck. And Melania hates it too. If she comes into my bedroom and whines one more time I swear I’m gonna divorce her. Just as soon as Sekulow can figure out how to break the pre-nup.

Let’s start with domestic. Yeah, let’s do domestic. How about that tax cut!? First, and I’m proud, biggest in history, no one ever...so massive...but, too bad none of it’s for the poor and middle class. But don’t tell them. They think I’m...it’s for them...ya know, I’m putting money...it’s going in their pockets.

Now let’s discuss the environment. Can we...this climate change hoax. Gimme a break. No one but Trump is telling you...winter? Like, and believe me, it’s not...have you seen...holy FUCK it’s been cold! It’s been so cold that the lies literally freeze in mid-air as they leave my face! That’s why I...and the French hate me for it...but...the Paris Climate Agreement is a waste of time. I was...we flew and spent....have you been to Paris recently? The weather there’s just fine, believe me.

Healthcare? Overrated. I wanna say...and this is...here’s the fix: don’t get sick! And...‘single-payer’ insurance isn’t the answer. Married people would want it too. This issue is...believe me, it’s a disaster. So there is...that’s why...and let me tell you...Obamacare is dead.

But, the economy...what’s more important than...and who knew...and the numbers speak for themselves people...it’s obvious that....to be honest, the stock market is...when Obama was president he tripled it. It’s way up under Trump, but it’s gonna...you know...stocks drop too. Bigly correction probably coming. Very bigly.

And jobs? Last year was the lowest in about 6 years. Obama created, like, he was more successful...when it comes to jobs he’s beat me every year. I hate that. You know I hate Obama, right? Why is that skinny black guy so much better than me at every goddamn thing!? Arrrgggggg!

Ok, time to address the 800lb Trump in the room. Racism. You got me! I’m a racist! Have you seen my record these past 40 years!? I’m so racist I make David Duke sound like Barney Frank. Let’s face it, and this is...I’m not the one who...white people are simply better than the blacks. And the Poo-ER-To Ricans. And the Mexicans. Pssst...here’s a little secret: that “Make America Great Again” thing? You know, it...guess what? I can...it really means “Make America White Again” (makes a weird hand sign).

I’m gonna do foreign policy now for just a minute because...and let me tell ya...I’m sorry...is it exciting? No. I really don’t really understand any of it and..and here’s what...I just can’t because many foreign leaders...and this includes our allies are... and it’s so frustrating...they’re just so weak and lame. Except Vlad. Can we talk about Putin for a second?

Look, there’s no collusion! Have I said that before? No collusion. Absolutely no collusion. If collusion walked up to me I’d be like...”Hey collusion...I don’t know you, fuck off!” I’m not kidding. If collusion was a pussy, I’d never even grab it. Not even a little. Ok maybe I would because...hey, what can I say...you know how I get around pussy!

So God bless you all...except Jeff Flake...and God bless the Unired Shates of America Ferrara.”
Posted by The Ostroy Report at 12:47 PM