Dear Media: It's Time to Stand the F**K Up With/For Jim Acosta 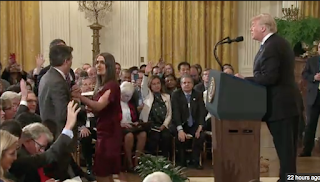 CNN's Chief White House press correspondent Jim Acosta has been stripped of his access. For asking a question about the RussiaGate investigation. For simply doing his job. Free speech and freedom of the press are under attack. And it would behoove every single other White House correspondent to turn in their access as well until Acosta's is returned. Because an attack on one of them is an attack on them all.

Trump's ferocious attacks on the media is nothing new. His relentless incendiary "the media is the enemy of the people" rhetoric has persisted for years and is believed to have inspired the recent bombing attempts on George W. Bush, Barack Obama, Joe Biden, CNN and his other perceived opponents. It's the same brand of hate-speak that's also inspired the mass shooting-murder at the Tree of Life Synagogue in Pittsburgh.

Which is why Trump's continued aggressive behavior and rhetoric towards Acosta, CNN and the media overall is beyond irresponsible and reprehensible and remains potentially deadly.

Adding insult to injury, the White House, through its Baghdad Bob press secretary Sarah Huckabee Sanders, even resorted to tweeting a doctored video (grounds for a massive libel suit?) Wednesday night to support the administration's nefarious claim that Acosta was menacing and physical towards a young female intern who attempted to grab the microphone away from him at Trump's surreal 90-minute East Village-worthy performance-art presser earlier in the day.

So it's time. It's time for the media to stand up to Trump and Sanders. To stand up for and with Acosta. To stand up for itself. For journalism. For freedom of the press and the Constitution. For decency, civility and the truth.

Because you can't have respect without self-respect.

And no self-respecting White House correspondent could/would/should allow this egregious, tyrannical neo-Fascist ban to happen without a strong rebuke and act of defiance and unity.

Despite the oath he took to protect it, Trump does not respect the Constitution. He openly disdains and attacks the media. He doesn't appreciate the job of journalists and the critical role it serves in our democracy.

He needs to be reminded of that. He needs to learn a valuable lesson. Now.

The worst thing you can do to Trump is to ignore him.