What If Trump Really DID Write Those Answers for Mueller Himself? 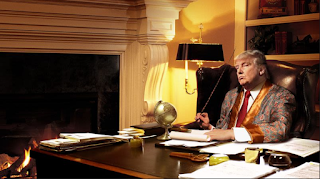 Trump and the Republican Party were trounced in the midterms. He was lambasted over his decision not to attend the WW1 ceremony in France and the Veteran's Day gathering at Arlington National Cemetery. The First Lady went rogue and publicly attacked one of his top national security aides, demanding her firing. The stock market continued to sink back to 2017 levels. And he and his lawyers were working on the written answers to special prosecutor Robert Mueller's questions into the campaign's possible collusion with Russia.

Trump insisted all week that he wrote the answers himself.

Bullshit. There isn't a lawyer alive who'd let an erratic, impulsive, delusional, pathologically-lying client like Trump write his own answers. Especially not on this level, about this subject matter and with the stakes so high. Plus, Trump can't string together two coherent sentences.

But I can't help thinking...what if he did write them? What the hell would that look like...

Mueller Question #1: Mr. President, did you know prior to June 9, 2016 that a meeting at Trump Tower would be taking place on that date between the Russians and your son Don Jr, son-in-law Jared Kushner and then-campaign manager Paul Manafort?

Trump: I knew that a...look...and I'll tell you this...it was a nothing meeting. There was no collusion! You can't do collusion if nobody offers you anything. Don't get me wrong. And I'll...did we try? But...and believe me...no one cuts deals better than me. If you read my book you'd...everyone knows, frankly, it's a witch hunt. FAKE NEWS! We talked about...and let me tell you it was not easy...Donnie said they had stuff...it was a waste of...we talked about adoptions. Babies. Little people. No big deal. NO COLLUSION! But I never...was I there? I mean I could be. Maybe I was. You tell me...

Mueller Question #2: Mr. President: Were you aware that, prior to the election, WikiLeaks provided hacked emails and other confidential documents from Hillary Clinton, John Podesta and/or the DNC to either Roger Stone or anyone else associated with your campaign?

Trump: I love WikiLeaks! I mean...and no one had more access to them than me...you know I know a lot of people. I build...they buy my apartments. Spend thousands. Billions. The Chinese. The Russians. The Saudis. They all love Trump buildings! WikiLeaks...they're very good at what they do. Julian likes me. And I like him. We talked a lot. Met a few times. But I don't know him. He gave me...everybody knows...NO COLLUSION. It's a WITCH HUNT! 12 angry Democrats who...and Mueller and Comey were lovers. Nobody talks about that. There's no...look...it's not illegal to take hacked emails. Everyone would. It's called op-po research. Perfectly ok to...but Roger never gave me anything. He gave it all to Donnie. So I'm in the clear. But there was nothing useful in them...believe me.

Mueller Question #3: Mr. President, did you fire then-FBI Director James Comey in order to stop the special investigation into collusion with Russia?

Trump: No. That's a stupid, stupid....I would nev...but let me tell you this...and, frankly, many people are saying the investigation is illegal. A total WITCH HUNT! There was NO COLLUSION! Did I want to stop the investigation? You could say that. But I'm not afraid of...look...did I think firing Comey would do that? I only hire the best people. Everyone wants to work for me. Comey, he was...people have this phony talk of chaos in the White House. FAKE NEWS! There's no chaos! It's Michelle Obama spreading lies, but nobody wants to talk about that. Comey? Yeah. I can tell you, frankly, I thought if he's gone I could put one of my guys in there...and I have a lot of friends who wanna help me...I should be protected....Rudy Giuliani...everyone knows he's the smartest lawyer in the history of the legal...and let me tell you...Rudy would've killed the whole disgusting, disgusting thing. And by the way, Jim Acosta's ugly and fat....

Mueller Question #4: Are you planning to fire me?