The Most Important, Most Terrifying Election in Our History 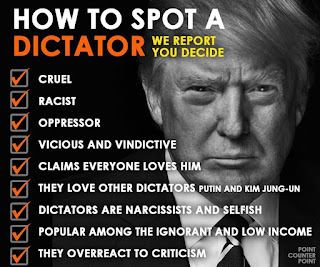 America's democracy is about to die. 242 years of freedom is on the ropes. Our time-tested system of checks and balances is about to fail. We are at dictatorship's doorstep. And that loud knock you hear is coming from Donald Trump's tiny hands.

We are about to give a blank check to a madman. A sociopath. A malignant narcissist who will stop at nothing to feed that rapacious beast of an Id. Be afraid. Be very, very afraid.

I'm sorry to be Chicken Little, but the sky is fucking falling...and I'm gonna cluck like a motherfucker till Tuesday.

America's facing its first true existential crisis. The America we know and love is being tested like never before. And so far it's miserably failing the test.

The Founding Fathers created three co-equal branches of government to serve as checks on each other. The thinking was, that even if Americans elected an amoral monster as president, Congress and the Supreme Court would, in their oversight roles, prevent a rogue leader from turning the nation into a self-serving oppressive cesspool. But what they never expected is that the other branches would not just abdicate this oversight role, but instead defend, protect and enable this monster.

So then what happens? No checks, no democracy. Welcome to the Reign of Trump. Where America has become unrecognizable.

Which is why one or both houses of Congress usually flips in the midterms after the presidential election. And more so, if the sitting president's approval rating hovers in the 40%-45% range, as Trump's does, there's typically a loss of 40-60+ House seats and an appreciable pick up of Senate seats.

So the conventional wisdom is that the Blue Wave's-a-comin', right?

But we have a sociopath madman in the White House. So fuck conventional wisdom. Conventional wisdom opened the window when Trump won the GOP nomination and then jumped to its frightful death the night he won.

To be sure, if there was a list of "The 1000 Disgusting, Horrible, Unconscionable Things a Presidential Candidate and President Should NEVER Do" Trump has done them all. Repeatedly. By now this teflon maniac...this corrupt, criminal traitor...should've been impeached, indicted and imprisoned. But...

Tuesday you will have a choice. As clear a fucking choice as there ever was. A choice between Democrat and Republican. Decency vs incivility. Good vs evil. Love vs hate. Freedom vs oppression. Democracy vs autocracy.

Say it out loud. Over and over again. Until you realize this is the most important, most critical, most unfathomably terrifying election in our nation's history.

You've gotta do whatever's humanly possible to get yourselves to the voting booth.

You've gotta vote to have that check on Trump, because if Republicans maintain control of both Houses, it's over. He will be more empowered, more emboldened and more destructive than ever. His dream of saying and doing whatever he wants and being above the law, of being a dictator, will finally be realized.

Show the fuck up.

Because there's no next time.

So vote like your life and your children's lives depend on it.

Because it does.
Posted by The Ostroy Report at 9:58 AM