Hey Trump: You Begged Voters to Make the Election All About You. They Did 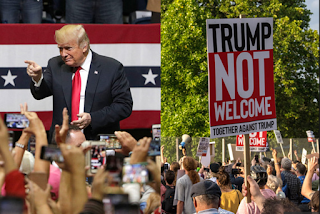 Dear Trump (I still refuse to acknowledge you as a legitimate president. Or even a "Mr"):

Congratulations! For months you've literally begged voters to make the midterm elections all about you. Night after night, rally after rally, tweet after tweet, you implored them to hit the polls yesterday thinking one thing: that it was you on the ballot. Well they did.

The election boiled down to a simple "yes" or No." Yes if you like Trump, no if you don't.

Americans said "No." Most of them, that is.

Voters sent a strong message to you that you are not above the law. That you do not defy political gravity. That the system worked. That 242 years of process hasn't been destroyed no matter how hard you've been trying.

You acted. You used. You abused. You broke the law. You've betrayed America. And now you and your complicit Republican Congress are paying the price. It's all catching up to you.

We let Trump be Trump, and guess what? The experiment failed. You are not only our worst enemy, but your own.

To be fair, last night did not usher in the big blue tsunami Democrats had hoped for. And that's disappointing. Because it means there's still way too many Americans who are still seemingly ok with pussy-grabbing, sexual-abuse, white nationalism and hate-speak. But to acknowledge the overall results as anything but a huge Democrat victory would be dishonest and foolish.

All across America the political landscape is changing. And not in your favor. Democrats flipped at least 28 House seats and re-took control. They even won seats in Texas and Oklahoma, for example. There's a Democrat governor of Kansas now. Beto O'Rourke and Stacey Abrams came way closer than they should've in deeply red states like Texas and Georgia respectively.  Seven governorships flipped. And state and local seats flipped as well. You did that. You cost your party this power.

The election was a big win for women, minorities and LGBTQ. These victorious candidates not only represent the diverse cultural patchwork that is America, but are well-poised to be incredible Senate candidates in 2020.

You asked for it to be all about you and we delivered.

You can spin the election as a "tremendous success" all you want, but we both know you understand the critical impact of losing the House. Of what it means to you and your crime family personally. You're most likely crappin' your pants right now. Because you know the investigations are coming. And the subpoenas. And the hearings.

And we haven't even gotten to Mueller yet...