Making the Case for Hillary 2020 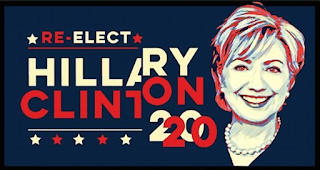 Before I begin, let me first save some of you precious time by writing a few of the hate-replies I'm expecting:

*Hillary? Seriously dude, WTF is wrong with you?
*Nooooooooooooooo!
*No more f**king Clintons!
*She was the WORST candidate in history!

Actually, she was the most qualified candidate in history, and she kinda sorta won. She received almost 3-million more votes than Donald Trump and, if we all truly believe in Robert Mueller's investigation into collusion and obstruction of justice, then we should argue that Vladimir Putin stole the Electoral College for Trump by a razor-thin 77,000-vote margin which crumbled the blue wall in Wisconsin, Michigan and Pennsylvania.

Full disclosure: I was all-in for Hillary Clinton in both 2008 and '16. I have three daughters. Like many Americans hungry for progress and gender-equality, I so desperately and passionately yearn for a woman president. Not only because it's about time we shatter that proverbial glass ceiling, but because I truly believe the future is female. That women should take over the controls...because America, and the world, would be a much better place for it.

And because I continue to believe Hillary is not only the most qualified candidate in history, but that she'd actually be an incredible president.

Ok, relax...I'll indulge you haters for a moment. Hillary did run a bad campaign (she never went to Wisconsin, for example). She is a polarizing figure. She is stiff and awkward. She can come off as entitled, arrogant and tone-deaf. And she does have a husband whose baggage is a real liability (but let's be very clear: she's not responsible for her husband’s behavior. She's a victim of it). Were she to run again, she definitely needs massive help (psst...Hillary...I'm available and ready).

In politics, four years is a very long time. Times change. Perceptions change. People change. Voters change. And yes, candidates can change too. Consider Richard M. Nixon, who had the last laugh in 1968 when, after his humiliating loss to JFK eight years earlier, went on to win two terms because America was a much different place than when he lost in '60. I don't believe the political and cultural landscape is much different in real terms now.

Could Hillary be the new-Nixon?

Regardless of what the haters believe, she still has the highest profile of any democrat. She still has tens of millions of voters with her. She's still as qualified as ever. And, assuming she'd be running against Trump and not a successful primary challenger such as Jeff Flake or John Kasich, would have a badly weakened, highly unpopular, scandal-plagued corrupt president she'd be running against. One with a disastrous term that'd be under an unmerciful microscope.

And no James Comey who, many including the candidate herself believe, tragically sunk her campaign in its final days with his public announcement that she was under FBI investigation while concealing that Trump was as well.

And Russia. We now know the extent of Putin's meddling to help elect Trump. That too would be under a microscope and perhaps much less of a factor if our intelligence community is effective in waging its counter-offensive.

To be sure, Hillary has been one of the most vilified political figures in modern history. And I’m in the camp that believe it’s largely due to sexism. Sadly, America still has a big problem with smart, strong, ambitious, determined, powerful women.

America needs to get over itself.

Think of the incredible message a Hillary victory would send to our daughters. That in the face of adversity, no matter who tries to keep you down, that even if you fail, you get back up and fight...and show the world you are smart, strong, ambitious, determined and powerful and successful in the end.

So what would Clinton need to do differently in 2020? She should avoid direct confrontations with Trump (or any other Republican nominee should Trump resign, not run, be primaried or be in prison). Stay away from personal attacks. Avoid the negative. Focus purely on the issues that Americans care most about, not the testy back-and-forth between candidates that frustrates, angers and exhausts them.

Issue #1: Health care. In 1993 Hillary, as chair of the Task Force on National Health Care Reform in her husband's new administration, took on an angry, obstructionist Republican Congress and the insurance industry to fight for affordable, universal health care. While her proposal ultimately failed in a bitter partisan and self-serving economic battle, Hillarycare served to pave the way for Obamacare 25 years later.

Issue #2: Middle-class tax cuts. She could run on providing the working class with the meaningful tax cuts Trump promised but forgot to give "the forgotten men and women."

Issue #3: Public education. Trump and his woefully inept and unqualified Education Secretary Betsy DeVos have a general disdain for public education, pushing through a budget which starves the system of critical funding.

Issue #5: Climate change. The planet is hotter, the weather more erratic and the storms more violent and deadly than ever. Americans want clean air, safe drinking water and a healthy Earth for themselves and their children.

Issue #6: Women's rights. Women are still fighting for equal pay, reproductive rights and protection from sexual-harassment and assault. The Me Too movement is a prime example of a major cultural shift since the '16 election.

Issue #7: LGBTQ rights. Equality for all Americans, regardless of sexuality. Need she say more...

Issue #8: Immigration reform. Kids were not caged pre-2016. Immigrants/refugees were not relentlessly demonized. America's values were not under siege. It's time for an immigration-reform policy which incorporates decency, compassion, humanity and increased border security.

These are slam-dunk issues. Hillary would have to effectively hammer them home with genuine passion and concern, and without engaging in personal mud-slinging with the Sociopath-in-Chief. Her campaign would need to be about her and what she can deliver to both democrats and republican voters, and not merely that Trump is an ignorant, sexist, misogynist, racist, xenophobic, corrupt traitor. That needs to speak for itself. And it will.

But there's still the personality problem. Hillary lacks the natural gifts that ooze from politicians like her husband and Barack Obama. The charm, the charisma, the public ease, confidence and comfort of their own skin. This is where she needs the most work. She needs to stop listening to the overpaid, under-qualified consultants with old-school instincts and an over-reliance on nerdy data. She needs to be able to sit with average folks on both sides of the political spectrum and be the girl they wanna have a beer with. She can do it. She just needs to let her hair down and trust her own instincts.

In short, she'd need to stay on message, avoid putting her foot in her mouth and connect on a real human level, while receiving the votes cast for her in '16 and, this time, campaign like an animal in the key swing states.