The Caravan: The Deadly Invasion That Never Was 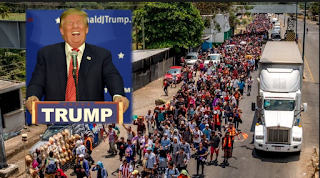 It’s been almost a week since Election Day. And in the run up to the midterms, Donald Trump waged an unrelenting xenophobic campaign to convince Republicans America was on the verge of a 'deadly invasion of thugs, MS-13 gang members and Middle Eastern terrorists' masquerading as a caravan of desperate freedom and asylum-seeking Hispanic immigrants--many of them women and children--walking thousands of miles through difficult conditions to escape persecution and the threat of death.

But miraculously, the nanosecond the election was over, the incendiary rhetoric, which had been feverishly spewing from Trump's mouth like projectile vomit, immediately stopped. As if the caravan doesn't exist and never did. Astounding that this grave national-security emergency, a crisis so out-of-control that it required Trump to hurriedly dispatch the United States military to protect the Southern border, has now suddenly and swiftly vanished.

Which if course means there is no imminent danger. And that there never was. No threat. No invasion. Just a rancid cesspool of cowardly fear-mongering. These immigrants are not thugs, gang members or terrorists. Their only crime is that they continue to see America as their great beacon of hope and promise...where they could keep their kids alive, work hard and pursue the American dream.

Which or course also means that Trump was lying. Again. That he shamelessly demonized these poor souls as pawns in his partisan shill-game to gin up the hate-vote. That he unconscionably exploited our troops for self-serving political purposes. That he yet again lashed out like a cornered rat because his fragile manbaby ego and political fortunes were threatened.

And once again he lied to the base. Those zombie-like cultists who would walk through fire for the sociopath who rewards their undying loyalty by summarily disrespecting and deceiving them with each syllable he speaks. By using and abusing their sons and daughters...who patriotically signed up to serve their country and asked for only one thing in return: to send them into conflict as a last resort. But instead of being mad-as-fucking hell they keep lapping up his deceptive bullshit like stray cats to a bowl of milk.

To be sure, over the past few weeks Trump has fed his base so much red meat they should be going into cardiac arrest. But they haven't. And probably never will. They are so brainwashed they'd likely follow him into the ether like the cyanide-swallowing Jonestown masses.

The unfortunate caravan saga is just one example of Trump's high crimes and misdemeanors. Just one example of how he's eroding our moral, ethical and legal foundations and normalizing ignorance, incivility, intolerance, racism, dishonesty and criminality.

Trump took an oath to uphold the Constitution. To defend and protect America's interests and the rights of its citizens. But almost every minute of every single day he violates that oath. He's betrayed his country and the people he was elected to serve. He puts his own interests before anyone or anything else. And as evidenced this past weekend in Paris, he's decimated our standing on the world stage. In doing so, our safety and national security is now at great risk.

Our future, and everything we stand for, is uncertain.
Posted by The Ostroy Report at 1:00 PM

The truth will come out soon, I hope. Will you accept the truth? It’s going to be difficult
to admit how wrong you are about Hillary, Obama, etc. and President Trump. Trump loves this country. If you love this country, then you can thank President Trump that we still have it. If you are rooting for the New World Order, you should really research to know what that involves; That’s what Obama, Hillary, Sr. Bush, etc. We’re fighting for. First, they had to bring down America,
before they could rule as a dictatorship. It would take pages to explain. Research what really happened, especially the last 8 years. And research how hard President Trump has worked for “the people.” He and his family have sacrificed more than we can imagine for this country. There is no way he is a coward. I can’t see how anyone could even say that about him. It doesn’t add up.