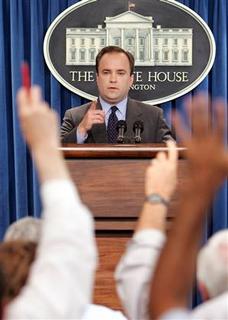 After two years of emphatic denials about the Bush administration's involvement in the outing of covert CIA operative Valerie Plame, and after many public promises to fire anyone caught leaking classified information, White House press secretary Scott McClellan dipped, ducked and dodged bullet after bullet from reporters at today's White House press briefing. It was downright ugly, and damned deserved. This administration has gotten way too comfortable flipping the bird at the press. Bush and McClellan were on the hotseat today after Newsweek magazine reported that top Bush advisor Karl Rove was indeed the super-duper-double-top secret source involved in the case, leaking information about Plame to Time Magazine reporter Matt Cooper in July 2003. Steadfast and stoic, McClellan repeatedly refused to answer direct questions about his and the president's past statements and denials: "I have said for quite some time that this is an ongoing investigation and we're not going to get into discussing it." The case has been under a federal grand jury investigation for the past two years. Sorry Scott. The press wasn't buyin' it. They were uncharacteristically aggressive in an attempt to get McClellan to respond substantively. In particular, NBC's David Gregory was unrelenting (bravo David!) in seeking an explanation why it was ok for McClellan to comment on the case many times in the past but not today. Calling McClellan's non-answers "ridiculous," Gregory, to no avail, demanded to know--challenging McClellan "to be honest with the American public"--if McClellan and the White House would be standing behind its past denials and previous promises to fire leakers. The White House clearly feels the intensifying heat, and is in damage-control mode. What to do next is the $64,000 question. It's main problem are the statements Rove made to the grand jury--where he's testified three times--and whether or not this testimony jives with Cooper's notes, or the previous statements and/or denials of Rove, McClellan and the White House. The real issue is whether someone in the White House, namely Rove, violated the Intelligence Identity Protection Act--a treasonous crime--in leaking Plame's identity. There's also the question of perjury. Regardless, this case is gaining serious traction, and could very well bring down Rove politically. As for criminal prosecution, say tuned. Andy
Posted by The Ostroy Report at 9:03 PM