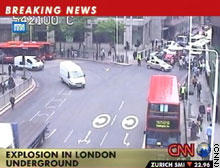 Most Americans are awakening this morning to learn that there's been a highly orchestrated series of terrorist bombings in London involving the subways and buses. Casualties are mounting as I write, but thankfully it appears that the overall scale is much smaller as compared to the tragic events elsewhere in Madrid and the U.S. for example. While not confirmed, it sure smells like the work of Al Qaeda or a similar Middle Eastern terror group. The deaths and injuries are a bitter pill to swallow. The resulting fear, panic and sadness is another. And that I'm sure is monumental. Our thoughts, prayers and support go out to the Brits. We certainly feel their pain. And it's a major wake up call. We're now dramatically reminded of our own vulnerability once again. With no attacks here at home since Sept. 11, 2001, we've been lulled into a false sense of security. But these horrific episodes can--and according to most experts will--happen here again in a matter of time. Today promises to be one of those days in America where people are in a subtle state of shock. We'll talk about this all day. We'll analyze, theorize and strategize. We'll express and share our anxiety and fear. We'll worry about our loved ones. And we'll talk of Iraq. And then we'll get angry. Damned angry. We'll get angry that we're squandering a tremendous amount of military and financial resources on an unjust war that is serving the U.S. no purpose other than to be a colossal distraction and diversion from the real war we need to be fighting. The war against those barbarians who snake through the world's underground unnoticed--without uniform or address or official standing--and carry out horrific, murderous attacks on innocent civilians, wreaking havoc on families and societies. These beasts are our enemy. And I know I'm not alone in wishing we were expending 100% of our political, military and financial resources to battle them, not Iraq. Let us all remember, it is not the Sunnis who may someday wreak havoc in Americas cities; in our subways; in our buses; in our malls. With the ever-growing dissatisfaction with the war, it will be interesting to see how all this plays out in Britain, whose populace has already lost its patience with PM Tony Blair and is dissatisfied with England's role in the war. And it's sure to stir up extremely strong emotions and political fallout here at home as well. Andy
Posted by The Ostroy Report at 7:34 AM