Let's Get the Focus Back on Rove! 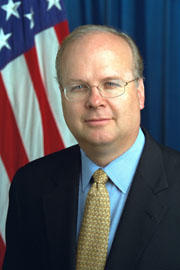 Last night President Bush named John Roberts Jr to replace Sandra Day O'Connor on the Supreme Court. There was much speculation that this was a well-timed Weapon of Mass Distraction in the Karl Rove scandal, and indeed today it was one. Congratulations George, you threw some reporters off the trail for a bit. But they, and we, are not stupid. Your Rove mess is still here, and so are we. And we're gonna keep pounding away at it, you and Rove for as long as it takes to see that justice is done. And that means the resignation or firing of Rove in the very near future. We're not really sure yet who or what Roberts is and what he represents, and quite frankly I don't care. I'm not saying I think he's a good choice. To the contrary, much of what I've read about him scares me. But, I didn't expect Bush to nominate a liberal. And in these highly partisan times, any conservative Republican he did nominate was sure to have something in his or her past to cause a stir among the left. We simply cannot filibuster everyone Bush nominates and expect to be taken seriously by the American voter. But on balance, for now, Roberts is non-extremist enough for me, as he appears to be for a great many Democrats on the Hill (remember his coasting through to the D.C. Circuit in '03 with just three "no's" from the left?). I predict following some requisite badgering during Roberts' upcoming Senate confirmation hearings, our side will approve. I think most Democrat Senators are already resigned to that. To wage a long, protracted battle over Roberts would be a mistake, especially when we still have a lot of work to do in getting rid of Rove. And let's not forget John Bolton, whose controversial nomination as UN ambassador still needs serious fighting. So let's not allow Bush and the Republicans to succeed in distracting us from these two very important battles. Let them have today. And give them Roberts. But tomorrow please focus back on TurdBlossomGate...the Rove scandal. Andy
Posted by The Ostroy Report at 9:50 PM