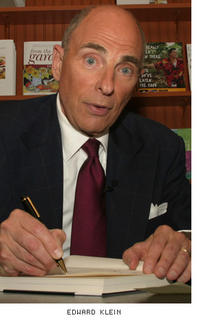 Ed Klein, in his new trash tome, "The Truth About Hillary: What She Knew, When She Knew It, and How Far She'll Go to Become President," ironically provides little actual truth. It's so off the charts with lies and outlandish claims that The New York Times and others refuse to review it (they regularly review books by politically conservative authors such as Hannity, Limbaugh, Coulter and others, so the Right's frequent claim of "liberal media" censorship has no legs whatsoever). In his book, Klein sucker-punches the Clintons on everything from power and ambition to sexual dysfunction. He writes that Bill Clinton allegedly raped Hillary in 1979 while the two were vacationing in Bermuda. Klein was discussing his book today (not sure if it was taped or live) with Monica Crowley, the Cruella de Ville of conservative talk radio. And it was on this program that I heard him make one of the most reprehensible, disgusting and shameful comments I've ever heard. I could not believe my ears. In discussing this particular Bermuda episode, he said he actually believes that Clinton did not rape his wife. And why does Klein feel this way? Because, and I quote, "Bill Clinton is too much of a wuss to rape anybody." Holy mother of Jesus! What kind of thing is that to say? Apparently in Klein's sick, twisted mind, rapists are revered, respected and must have qualities such as strength and manliness that he obviously believes Bill Clinton does not possess....therefore making him a "wuss" and not capable of rape. Will the "established" media pick up this incredible piece of news? Will he be admonished for making such a loathsome, insensitive comment about one of the worst crimes one human being can commit on another? I doubt it. Andy
Posted by The Ostroy Report at 2:46 PM

Boeing just announced the new wide-butt airliner inspired by the figure of none other than Hillary Clinton. Who cares about the has been Slick Willy. Just forgive the man and move on. Living with Hillarious would drive any man to distraction.