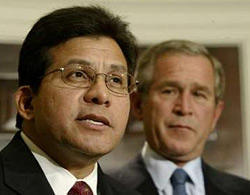 Gazing at the front page of my NY Times this morning I saw a headline that literally made my day: "G.O.P Asks Conservative Allies To Cool Rhetoric Over the Court." This is what I and millions of Democrats have been waiting for. Even the slightest sign that we may have reached a tipping point is very, very exciting. We've been sick of these religious zealots practically running the country, influencing policy and undermining the Democratic process, but now Republicans are fed up too? Pinch me! What they're really worried about is how these evangelicals could very well undermine the GOP agenda if they're allowed to continue to run amock unchecked. Now, the higher word has come down from above...er...from Bush, Frist & Co. that is. And it all started over US Attorney General Alberto Gonzalez, over whom conservatives have gotten their panties in a collective snit because of his loosey-goosey views on abortion, the only issue that seems to matter to these fanatics (oh, forgive me....I left out gay-marriage, prayer in school and public display of religious items...thus comprising the four most pressing issues facing Americans and the entire world today). The mere thought of Gonzalez being nominated by Bush to replace the retiring Sandra Day O'Connor on the Supreme Court has sent the pro-lifers into vitriolic orbit...going from zero-to-sixty in nanoseconds. The all-star fanatical "values" team of Tony Perkins, Grover Norquist, Gary Bauer, James Dobson and C. Boyden Gray to name a few have rallied the troops, opened the cash register and begun slinging the mud in a very aggressive, public campaign to kill a Gonzalez nomination. All because of one issue: abortion. Not torture of war prisoners, which the infamous Gonzalez memos seemingly condone, or his extremist views of the Geneva Conventions. But that's ok. The evangelicals are fine with a little torture now and then. So now we have the president, Bill Frist and others in the White House and Senate telling these myopic fanatics to stop the attacks on Gonzalez. A mere slap on the wrist? Maybe to you. But to me it signals that the religious zealots have finally gone too far. And the GOP itself may have had enough, sensing that the very same people who put them in ofice can just as easily be their political kryptonite as well. Stay tuned. Andy
Posted by The Ostroy Report at 7:11 AM