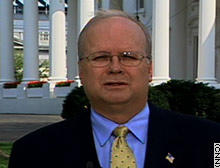 There's a fun new game in Washington this week. It's called, Let's see how many times we can get Scott McClellan to say "We're not not going to answer questions relating to an ongoing criminal investigation." White House correspondents in particular just love playing ScottieBall! My new favorite media trio, CBS's John Roberts, ABC's Terry Moran and NBC's David Gregory have mercilessly, and deservedly, pummeled McClellan, White House press secretary, ever since the news broke yesterday that Newsweek magazine has proven that "Bush's brain" Karl Rove was at least a source, if not the super-duper-double-top-secret source, of the identity leak of CIA covert operative Valerie Plame, wife of former Ambassador Joseph Wilson. Wilson, you'll recall, was sent to Niger (we're still not sure by whom exactly) to find out if Iraq was attempting to purchase uranium used in WMD. They weren't, he concluded, and wrote about it in his July 6, 2003 NY Times Op-ed piece, which really pissed off the Bushies. Jump to this week, where the daily press briefings are quickly becoming McClellan's new workout regimen. He sweats at the podium more than I do on the treadmill. Thank God the journalists' gloves are now officially off. Too bad it only took five years and two Bush wins for it to happen. But the press is now firmly on message. No more namby-pamby pacifism in the press room the second a snide, flip comment or shut down comes their way. Like sharks smelling blood, the White House press corps won't let go. Can ya blame 'em? They've endured their share of pummeling these past five years, and feel as lied to and deceived as we do. McClellan is on record having stated numerous times in the past two years that neither Rove, VP Dick Cheney or Lewis "Scooter" Libby, Cheney's Chief of Staff, had anything whatsoever to do with Plame's outing. And, both McClellan and Bush have previously promised to fire anyone in the administration who's leaked classified information. The press is demanding to know if McClellan and his boss will stand by these statements. They fired hardball after hardball at Scottie yesterday and today. And that's how ScottieBall, was started. The daily press briefing is my new favorite show. I can hardly wait for 12:30 tomorrow. In between the daily briefings, we're treated to the usual Republican double-talking spin monkeys that are doing their damnedest to defend Rove and his actions. My favorite is the "He never mentioned her name" defense. Once you knew that Wilson's wife was in the CIA, as Rove so generously offered up in '03 to various reporters including Time's Matt Cooper and most likely the NY Times' Judith Miller and syndicated right winger Robert Novak (whose July 14, 2003 column actually named her) it would've taken a 5th grader all of one minute for a Google search of Wilson's bio to find Plame's name. One plus one equals, duh, two. My next favorite tactic, as demonstrated nobly tonight on Chris Matthews' Hardball by conservative talking head Tucker Askew, is to point out that Wilson voted for Kerry in '04. Huh? What the hell does this have to do with anything? I guess anyone and everyone who votes Democratic must be part of some larger conspiracy to undermine society, and therefore anything and everything they say must be a lie. Sure, let's smear the crap out of anyone who disagrees with us or criticizes us. Well, at least the GOP's consistent. Next, we have McClellan's incessant "protection" of the "ongoing investigation." An investigation, mind you, that he and Bush had no problem talking about publicly for the past two years. I guess now that Rove's been caught in the henhouse it's time to get righteous. Lastly, I love the one about how Rove was merely trying to inject some truth and integrity into these reporters' stories. Ha! Now that'll keep me laughing all night......Andy
Posted by The Ostroy Report at 8:34 PM