The "Global Struggle Against Violent Extremism" 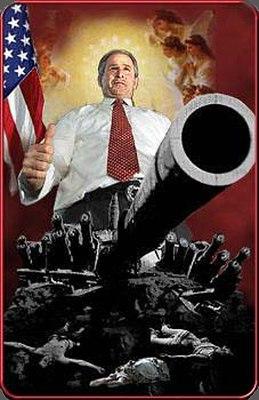 What happens when you invade a sovereign nation on false pretenses to wage a "war on terror;" prematurely declare "mission accomplished" three weeks later; and then after two years be on the seemingly losing end of one of the most violent insurgencies ever? Well, a "war" is no longer what we're fighting, and the enemy is no longer a noun (which was pretty inane from the start). In the past two weeks, various members of the Bush posse, including the president himself and Defense Secretary Donald Rumsfeld, have strategically been referring to the fiasco in Iraq as the "global struggle against violent extremism." Interesting. For two years it was nothing but war. Now that we're getting our asses kicked daily by a exponentially growing insurgency obsessed with suicide bombs, I guess it's time to change the game. Can't lose a "war" if you're not fighting one, right? Jeez, there's no limit to how arrogant and offensive this administration can be. Hey George, just what did happen to the war? It still looks, smells and feels like one, doesn't it? And with five US soldiers killed today and a total of 1800 since this non-war began, the death toll sure smacks of war as well. The Bushies are getting good at bait and switch and smoke and mirrors. They think we're all a bunch of morons who'll suddenly forget what we're doing in Iraq and why we went there in the first place. Well, I suppose they're half right. Many red-staters and party faithful actually will believe this garbage. They're the same misinformed loyalists who proudly slop up their cars with yellow "Support the Troops" decals. If they truly wanted to support our soldiers they'd demand to know when the hell they'll be coming home. But these good 'ole fashioned patriotic Americans don't get too mired in facts and details. Which is why they'll buy into this "global struggle" BS. And pretty soon, Bush just might even have them forgetting we're actually in Iraq. Hey, it worked with WMD. Andy
Posted by The Ostroy Report at 5:48 PM