Bush Yet Again Divides Not Unites 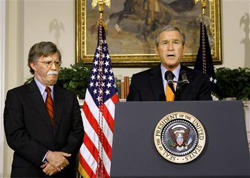 You may remember the NY Daily News headline of October 30, 1975 concerning then-president Gerald Ford's reply to Gotham's financial crisis: "Ford to City: Drop Dead." Tomorrow's papers could carry the headline, "Bush to Congress, America, the U.N. and the World: Screw You." As expected, the president today made his recess appointment of John Bolton as U.N Ambassador despite public outcry and intense opposition from Democratic and key Republican Senators. Yes, the man that said "There's no such thing as the United Nations.... If the U.N. secretary building in New York lost 10 stories, it wouldn't make a bit of difference," has just had the most important, highest-ranking diplomatic job in the world bestowed upon him. You got it. The same guy who exaggerated intelligence to fit his aggressive accusations about Iraqi, Cuban and Syrian WMD. The same guy who derided and abused subordinates who disagreed with him. The same guy who chased a woman around a Russian hotel (my favorite of all Bolton folklore) throwing shoes and screaming obscenities. Welcome to George W. Bush's never-ending quest to unite not divide. Here he is once again demonstrating absolute disregard for the economic, social, emotional and political schism in our nation today. Hell, he's the cause of it. It's not bad enough that the world has lost respect for us and loathes our leadership. It's not bad enough that we're occupying a sovereign nation that posed no threat to us and was invaded under false pretenses. It's not bad enough that our citizens and military face death from venomous, hate-filled suicide bombers and terrorists who view us as the world's bully. Our brilliant president has decided that the answer to our diplomatic problems...that the person best suited to recapture our once-great standing in the diplomatic community...is John Bolton. Bush arrogantly defies reality. He doesn't care that this temporary appointment goes in as "damaged goods" as Sen. Chris Dodd (D-CT) stated, and does not have the support of our country and congress (Bolton, as a recess appointee, under law will serve until January 2007). How will he be viewed? Will he garner the respect from our allies? From the Third World nations whose relationships with the U.S. are already strained? Will he, can he, truly get anything done with such a flimsy mandate? The answer is no. On the world's stage, he will be viewed as illegitimate, just like his boss. As far as I'm concerned, 2008 can't come soon enough. This country needs to get back to being the greatest nation in the world, not a cheapened replica that's led by thugs and theocrats. Andy
Posted by The Ostroy Report at 10:32 PM