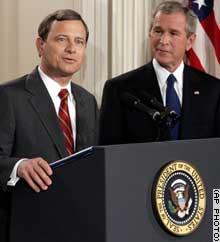 Just when we were starting to believe Supreme Court nominee John Roberts Jr. was right-wing all the way, we find out that he's the little-known sixth member of the "Queer Eye for the Straight Guy" team. Ya know, the one that provides free legal advice. News came out yesterday that Roberts provided critical pro-bono advice to advocates for gay rights in a case that resulted in a 1996 landmark ruling that's considered by the gay community as the cornerstone of their civil rights movement. The Supreme Court, in a 6-3 decision, had struck down Colorado constitutional law which stripped gay men and lesbians of certain civil liberties and barred the state from passing future antidiscrimination laws. While working as a lawyer at DC firm Hogan & Hartson, Roberts provided key guidance to the plaintiff's lawyers in the case, Romer v Evans. He advised them of their need to snag the middle in order to get a majority, and then specifically outlined strategy to counter the challenges expected from hard-line conservative justices like Scalia and Rehnquist, who Roberts once clerked for. Essentially, the lawyers were advised by Roberts to show that the court would not have to overturn a previous case, Bowers v. Hardwick, which upheld a ban on homosexual sodomy, in order to overturn the Colorado legislation. To make a long story short, the Romer case was won by gays, and it paved the way for future rulings crucial to the gay rights movement. So what do we make of Roberts? Where does this fit in to the picture that's been painted lately of a staunch conservative who should be feared by the left? Well, he's not only scaring liberals. Conservative groups are now wondering as well just who this guy is and what his true beliefs are on a number of sensitive issues. The Romer case makes him more of an enigma than before. Will he surprise the right and become another Souter? Doubtful. But can he still disappoint the hard-liners who were all too sure that he was their man in the Scalia/Thomas mold? Absolutely. Andy
Posted by The Ostroy Report at 8:50 PM

Roberts? He's here and he's queer. No doubt. He drools for GannonGuckert. Like well-known closet case Giuliani and his second cousin, he's also found himself in a marriage of convenience--and he didn't have to waste his judicial activism to knock his 'feminist' wife up twice.