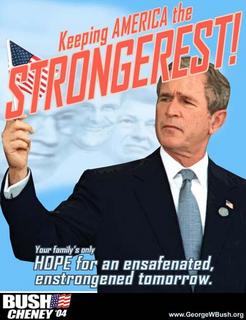 Poor President Bush. His job approval rating has sunk below 40%, only 48% of Americans think he's honest, and 56% think he's too cocky and arrogant. And, a majority now disapprove of the war in Iraq and Bush's handling of it. A pretty dismal picture, I'd say. Perhaps it's time for a little PR move. Let me suggest a sure-fire points-scoring mea culpa photo-op for the prez. I think he and his advisors should stage an event outside the Crawford ranch, with a huge banner draped across his house that reads "Mission Adjusted." As he famously did with that firefighter atop the Ground Zero rubble in the days following the 9/11 attack, Bush could stand in the foreground, bullhorn in hand, arm-in-arm with protestor Cindy Sheehan, and boldly declare that the administration's made some terrible mistakes in Iraq, and that the mission has been adjusted to reflect the realistic strategy needed going forward. He can start by saying the grounds for war were unjust and unfounded. No WMD, no Saddam ties to Al Qaeda. He can then apologize for his pathetic G.I. Joe grandstanding moment aboard the aircraft carrier USS Lincoln on May 1, 2003 in which he prematurely and pompously declared "Mission Accomplished." Next, he can admit he and Defense Secretary Donald Rumsfeld grossly miscalculated the number of troops needed to safely and effectively handle the post-war occupation (pssst...now might also be a great time to offer an apology to Army Gen. Eric K. Shinseki, whose opinion that several hundred thousand troops would be needed in postwar Iraq was summarily dismissed as "wildly off the mark" by the Bushies). Bush could also say he misjudged the effect that several milestones--Saddam's fall and capture; the deaths of his sons Uday and Qusay; the handing over of sovereignty; the Fall of Fallujah; the Iraqi election--would have on weakening the insurgency. He can admit that he, Rummy and VP Dick Cheney incredulously, and wrongly, believed that the Iraqis would greet us as liberators, and lavish us in the streets with roses and hero-worship. Bush can also say it was bad judgment and highly unpresidential to challenge the murderous jihadists with macho Texas rhetoric such as "Bring 'em on." He can admit that America's original goals for Iraq will not be met. He can admit that we will not see an American or even European-style democracy there. He can admit that the Iraqi draft constitution is woefully inadequate in protecting the rights of women and minorities, and calls for the country to be led by Iran-leaning religious clerics with Islam as the law of the land. He can admit that our military forces there are under-manned and illequipped, and most often just sitting ducks for an invisible enemy. Once cleansed of the past, he can then talk about how the plan going forward needs to change, as do our expectations for the mission. And in the same breath he can level with the American people in saying that, while the invasion and occupation was/is a huge blunder, we need to figure out the most realistic exit strategy now so that we can minimize the amount of future U.S. casualties. He can announce that he is going to immediately pull together a bi-partisan think-tank of the nation's brightest political, military, business and academic minds for a weeklong summit to discuss the advantages and disadvantages of the three primary options at hand. These are a complete and immediate pull out; a gradual withdrawal of troops over an extended window; or an increase in troops and an escalation of the war in order to victoriously complete the mission. Bush can also announce that he will immediately reach out to our allies, as well as to Iraq's neighbors, apologize for previously failed diplomacy, and earnestly seek to enjoin/entice them into the post-war effort, building a true coalition. He can also show some administration accountability by immediately and unceremoniously firing Rumsfeld, whose battle plan, unlike Gen. Shinseki's, was indeed wildly off the mark. It'll be more than just a symbolic move; Rummy was the major architect for this military fiasco, and his pink slip is long overdue. (In case Bush needs a replacement idea, let me recommend Fmr. Gen. Wesley Clark, NATO Supreme Allied Commander, Europe. Clark is a brilliant combat veteran and military chief; a master strategist; a skilled diplomat; highly articulate; and a truly fine, compassionate human being). Finally, as he stands there outside the Crawford retreat talking to the increasingly hopeful, galvanized crowd before him, and to the millions watching at home, he can take Cindy Sheehan's hand in his, raise their arms up high, and proudly say that from now on we have one America. Now, wouldn't all this be something. A president who admits his mistakes, is honest with the American people, realistically plans for the future, and is a uniter not a divider. Andy
Posted by The Ostroy Report at 7:10 AM

Wow, I have read through your blog and you are quite obsessed. You jump from one obsession to the next: Bush, Delay, Rove, GOP in general. If you look at my blog you will see I am concervative and criticize Libs when they do or say something that deserves it. Yet when a GOP does something that deserves cricism, I will do that. If a Lib does something worth praise I will do that. This non-stop obsessive rant of yours makes me question your ability to view things objectively. You've gotta dump the hate or it will eat you alive.

WTFE! If the GOP/Conservs is preach about anything, it would definitely be hatred. They want to live in a world where only they have control, and they hate anyone who stands in their way...from gays to anti-war efforts.

I agree that this blog is a bit opinionated, but thats whats GREAT about blogs (and America!)! He has an opinion, I agree with it, and it has been well put and presented. Keep it up!

I am as opinionated as Rush Limbaugh, Sean Hannity, Ann Coulter, Andrea Ingraham and others are on their TV & radio shows, web sites, and blogs. The funny thing about many Republicans is, is that they're love war, love to send our troops to "die to protect the freedom" of others, yet have a hard time with free speech and difference of opinion here at home.

Nobody is trying to take away your free speech. You libs always think critique is somehow robbing you of free speech. You have the right to be hateful on your blog if you want, and all the lib activists can be hateful if they want. This is a free country. Just like we can eat fast food all the time if we want. It doesn't make it good for us.

My blog is very opinionated, but I think even you libs would be hard pressed to find hatred in it. The radio hosts you mentioned are opinionated, but I don't sense hatred on their shows like I do on Air America. Now that is hatred.

You're too funny! Typical Republican double-standards. Rush, Sean, Ann Coulter etc not hateful? Are you kidding me? And as for us "Libs," well, anytime anyone disagrees with you guys and your president we are branded as hateful, anti-American, un-patriotic and obstructionist. The only anti-American, un-patriotic and hateful ones are the people who aggressively attempt to strip others of free speech and the right to disagree and criticize. Being able to criticize government and its leaders and vote them out of office is the very foundation of Democracy.

Right wing hypocrisy never ceases to amaze me. Plus they never use spell check because they think stupidity is cute, after all their mother loved them didn't she? It is OK to be a misinformed dummy with a heart the size of a walnut I guess because your mama thought everything you did was cute, even when it was despicable. After all "libs" are supposed to be peace loveng tree hugging and spineless aren't they, so when we get right up in your face and call you on your bully boy bullshit, you act surprised. You ain't even begun to see how ugly things can get. Rock On Ostroy!