Gunshots Ring Out in Crawford 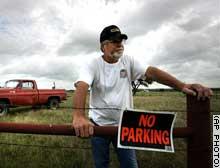 And on the seventh day...some Texas lunatic decided he'd had enough with grieving Army mom Cindy Sheehan's protest vigil outside the Bush ranch/home office in Crawford. So what's a frustrated redneck to do? Why, drive by and blast a few rounds into the air, that's what! Yeah, surely that'll rattle these unpatriotic anti-Americans joined together by the simple fact that their sons, friends and relatives died in Iraqi combat so some bloated ignoramus named Larry Mattlage has the Constitutional freedom to grab his shotgun off the pick-up truck gun rack and let his Smith & Wesson do the talking. Seems 'ole Larry is pissed at the growing legion of demonstrators banding together in solidarity with Sheehan, who's been camped outside the ranch since Aug. 6 to demand answers and accountability from Bush over the 1845 deaths of U.S. soldiers, including her son Casey, 24, who died last Spring after being in Baghdad just five days. "I ain't threatening nobody, and I ain't pointing a gun at nobody," Mattlage said. "This is Texas." Can you believe this cretin? Yeah, Larry, we know all about Texas. Have you forgotten that our supremely arrogant good 'ole boy president is one of yours? We haven't. Maybe you think it's ok for Texans to speak with their shotguns, but the rest of the civilized world might suggest another form of expression. So you were just firing into air, you say. What's next? Grazing someone's temple? A shot in the leg? This guy's a nutcase who would be locked up in most other states. But not good ole' Texas. And what was it that's really irking this despicable neanderthal? "They moved one port-a-potty. Now we got two port-a-pots. And now we got three, and if this keeps up, they'll be all the way at the end of the road." That's right, Larry. And hopefully there'll be more and more pottys until your whole town is one giant protest over this arrogant, inept and deceitful president and his fiasco of a war. Andy
Posted by The Ostroy Report at 12:36 PM