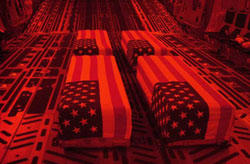 The War on Terror. Whatever that may be exactly, it sure doesn't feel like we're winning it lately. August is shaping up to be the bloodiest, deadliest month since the Iraq war began, and as the New York Times reported today, the GI death toll in Afghanistan is the worst since 2001. To the president, we're making great progress. Despite the chaos that's taking place in both of these countries, the administration's holding firm in its public stance: the plan's working, and we'll stay until the mission is is completed. Over 1860 US soldiers have been killed in Iraq so far, and the occupation is costing us over $1-billion per week. To most rational people, the insurgency is getting stronger, deadlier and more bold by the minute, using more lethal weapons to kill and maim our soldiers. The country is on the verge of a civil war, with the Sunnis, Shiites and Kurds all in a land and power grab. There's still no constitution, and services are poor. In Afghanistan, where elections are to take place September 18th, the violence is the worst we've seen since the war began in 2001, with sixty-five American soldiers killed so far this year (13 in August alone). For proper perspective, 181 have died since the military operations began, so this year's death toll is indeed startling. Al Qaeda is still a force to be reckoned with, and the ousted Taliban is doing everything in its power to regain control and force out the Americans. Foreign fighters from Pakistan, Central Asia, Iran and elsewhere have crossed the borders to aid the insurgency. And funds are pouring in as well. And here at home, support for the war, and Bush, is at an all-time low. A majority of Americans now believe the war is not worth the cost, and most disapprove of how the president has handled it. And, Bush's approval ratings are at a pathetically low 42%, considerably lower than Reagan, Bush 41 and Clinton at the same point in their second terms. Some in the GOP, especially those eyeballing next year's mid-term elections--which could very well prove to be a fiasco for Republican incumbents--are starting to question what that mission is, and how and when it can/will end. Outspoken Nebraska Sen. Chuck Hagel is now making comparisons to Vietnam. Hagel, standing by earlier statements that the Bush administration is disconnected from reality and losing the war, said last week that while Iraq and Vietnam still have more differences than similarities, "there is a parallel emerging. The longer we stay in Iraq, the more similarities will start to develop, meaning essentially that we are getting more and more bogged down, taking more and more casualties, more and more heated dissension and debate in the United States." And while the Bush message remains steadfast and one of "progress," Hagel pointed to the rapidly rising death toll and a situation he called a quagmire: "more dead, more wounded, less electricity in Iraq, less oil being pumped in Iraq, more insurgent attacks, more insurgents coming across the border, more corruption in the government." Hagel, I'm sure, speaks for many among the GOP who are not yet ready to split publicly with the president. But as we inch closer to the mid-terms, and especially if the situation stays as bad or gets even worse, many more self-preservationists will break ranks as well. What's most unnerving and infuriating is that, amid all this death and chaos, Bush is on the longest vacation in presidential history. To reporters who caught up with him early Saturday on the Crawford ranch and asked about his plans, Bush said: "I'm going to have lunch with Secretary of State Rice, talk a little business; Mrs. Bush, talk a little business; we've got a friend from South Texas here, named Katharine Armstrong; take a little nap. I'm reading an Elmore Leonard book right now, knock off a little Elmore Leonard this afternoon. Go fishing with my man Barney; a light dinner and head to the ballgame. I get to bed about 9:30 p.m., wake up about 5 a.m. So it's a perfect day." Just ask all the dead soldiers and their families just how perfect a day they think it is. Andy
Posted by The Ostroy Report at 8:30 PM