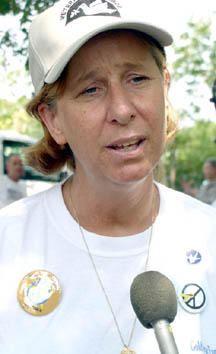 President Bush yesterday stepped up to the mike at the Crawford ranch and in his persistent delusional state declared yet again that "we're making progress in Iraq." Forget that August is shaping up to be the deadliest, bloodiest month since the war began; that over 1840 U.S. soldiers have now been killed; that armed militia stormed Baghdad's municipal building this week and deposed its mayor and installed a Shiite leader; that the insurgents are obtaining and using bigger, more lethal bombs; that the Constitution still seems eons away; that Shiites want a separate, autonomous region in the South; that Fallujah is now a terrorist haven again; that elections in December promise even more violence; and that Iraqi armed forces and police appear years away from being ready to take over, if ever. Will someone please tell the jihadists that the "insurgency is in its last throes," as VP Dick Cheney recently declared, because they sure as hell don't seem to know this. So now along comes Cindy Sheehan from Vacaville, CA, the soft-spoken yet highly articulate and media-savvy mother of 24-year-old Army SPC Casey Sheehan, who was killed just five days after arriving in Baghdad last Spring. Looks like Bush has finally met his match; someone who will not buckle under his arrogant bullying and condescending dismissals. Sheehan has parked herself outside Bush's Crawford ranch in protest of the war, demanding answers as to why her son and 1840+ others have had to die. "This is George Bush's accountability moment," she said. "That's why I'm here. The mainstream media aren't holding him accountable. Neither is Congress. So I'm not leaving Crawford until he's held accountable." Bravo Cindy! It's about time someone demands accountability from this president. And she's the perfect spokesperson for most of us Americans who also happen to believe this is an unjust war with no end in sight. Sheehan won't let up. In fact, she's being joined by hundreds of others. This weekend she's staging a mass protest and expects one thousand or more supporters including many other grieving parents of soldiers killed in action. As the saying goes, Bush can run, but he can't hide. Sheehan's getting massive media play, and has the sympathy of a majority of this country. Said Sheehan of Bush: ..."my message is a simple one. He's said that my son, and the other children we've lost, died for a noble cause. I want to find out what that noble cause is. And I want to ask him...If it's such a noble cause, have you asked your daughters to enlist? Have you encouraged them to go take the place of soldiers who are on their third tour of duty?" Seems like pretty reasonable questions to me. Bush has so far refused to come out to speak directly with Sheehan saying the two spoke one-on-one last year and that he's also repeatedly stated his position--that the war on terror needs to be fought and that the troops must stay until the task is completed. Clearly, Bush is shuddering in his big ole' Texas boots about the mere prospect of facing this woman and the nation, unscripted, to answer direct questions about this fiasco of a war. Conversely, Cindy Sheehan stands tall, looms large, and speaks for us all. Andy 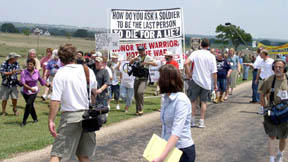 Posted by The Ostroy Report at 6:40 PM