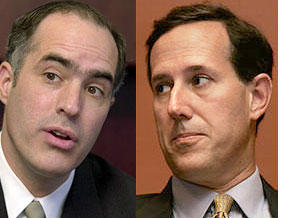 In his column Monday, embattled right-wing pundit Robert Novak suggests that there's a chink in the Republican armor, and that the '06 mid-term elections could be a disaster for the GOP if it cannot find the best candidates to run against what he believes are weaker, politically vulnerable Democratic incumbents such as Debbie Stabenow (MI), Bill Nelson (FL), Robert Byrd (WVa), Kent Conrad (ND) and Ben Nelson (NE). Not only could Republicans fail to pick up seats, said Novak, but they could lose seats as well. Exactly, Bob. The war, the economy, astronomical gas and oil prices, the increasing rejection of the religious right (the spectacle that was the Terry Schiavo case; the Ten Commandments displays; the failed "Justice Sunday" propaganda events; stem cell research; privacy and the pro-choice movement; etc) will play a major role in the next Congressional and Senate elections. Novak's worried, and so are his pals in Washington. And they ought to be. While Novak did mention Florida's Rep. Katherine Harris as being weak and lacking in GOP support for her Senate bid, he failed to mention key Republican Senators who are quite vulnerable as well, among them Rick Santorum (PA), the third-highest ranking member of the Senate, and who's trailing PA State Treasurer Bob Casey Jr. in the polls by about fourteen points. Another is Missouri Senator Jim Talent, whose challenger is Robin Carnahan, the recently elected secretary of state with a strong state political pedigree: his late father was governor and his mother was the incumbent whom Talent beat for his current seat. Also vulnerable are Arizona Senator Jon Kyl; Montana's Senator Conrad Burns; Ohio's Mike DeWine; Virginia's George Allen, who's got Gov. Mark Warner hot on his trail; and even the big fish himself, Senate Majority Leader Bill Frist (TN). With his breaking ranks with Bush over federal funding of stem-cell research and a growing disenchantment among Americans with the Senate and Congress's overall performance, Frist could very well find himself playing golf with Tom Daschle next year. The Republicans should be very worried indeed. Andy
Posted by The Ostroy Report at 7:05 PM

Regarding stem cell research, I'm wondering if you've you seen this round-up yet.

Given that your link is to an article from "Christianity Today", I don't think many people will give it much credibility. Obviously, publicly, Christians in general, and the religious media, are biased on this issue, and will spin and distort the truth to support their highly impassioned case. Unfortunately, we live in a society today where religious zealots are aggressively trying to control the lives of the rest of us. That's why people like me are highly suspect of people like you ands the "news" you ask us to read. As far as I'm concerned, there's PLENTY of medical and scientific evidence to support the exisiting claims that embryonic stem cells can be a major breakthrough in treating disease.