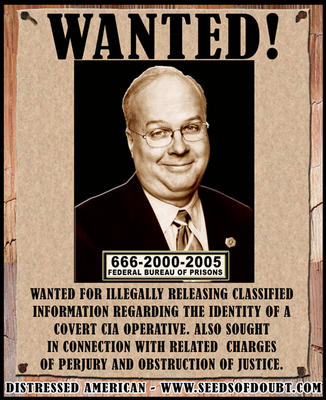 It's starting to smell real bad in Washington, and the putrid air is blowing straight from the White House. The cast of characters in the Karl Rove scandal now includes not only Rove, the one-time boy wonder whose reputation and political career is on the line, but, among others, former Press Secretary Ari Fleischer, Chief of Staff Andrew Card, Dick Cheney chief Scooter Libby and most likely Cheney and President Bush himself. As old-school political pundit and former presidential adviser David Gergen asked on ABC's "This Week" Sunday, "What did the president know and when did he know it?" Sound a little like Watergate? You bet it does. And the Rove scandal has many parallels to Watergate, including leaks, lies and cover-ups. But just what did Cheney and Bush know is the $64,000 question. And, when did they know it is equally important. We do know that two years ago Rove, Cheney and Libby told Press Secretary Scott McLellan they had nothing to do with the outing of CIA operative Valerie Wilson (nee Plame). McLellan then emphatically, and repeatedly, reiterated this to reporters at several daily briefings. At that time, had Bush asked them himself if they were involved? Given Bush's promises to both investigate and punish leakers, you'd have thought such direct questioning would be de rigueur . If so, did they deny it to him as well, thus making him a patsy? Or did they fess up and therefore Bush has known for years who was involved, thereby lying to both the American public and the press. We know Rove lied. We know Libby lied. And we can assume Cheney lied. We know Card gave his compadres a critical 12 hours to potentially destroy evidence. And we know that Bush either was lied to and duped by trusted aides, or complicit himself. Neither scenario is very becoming for the president. The case is starting to get quite juicy, folks. So much for the Roberts/Supreme Court Weapon of Mass Distraction, huh? The case hinges on testimony provided at special prosecutor Pat Fitzgerald's grand jury investigation; key testimony given by Rove, Card, Cheney and Bush, among others. Will the facts add up? Will testimony of one contradict the others? Does this case ultimately lead back the Oval Office? It sure smells that way. Stay tuned. Andy
Posted by The Ostroy Report at 6:20 PM