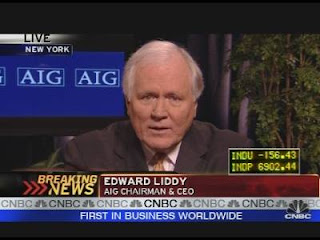 It's Christmas in March at The American International Group (AIG), the near-dead insurance and financial products behemoth that racked up the largest loss in U.S. history last quarter, $61.7-billion, and which has been on the receiving end of $170-billion in federal bailout money. And the message the hemorrhaging AIG's sending the White House, taxpayers and it's beleaguered executives is, run this company damn near into the ground and there's a $450 million bonus pool waiting. Yes, as infuriating and insane as that sounds, it's bonus time over at AIG, again. And it's you, me and every other taxpaying American who's footing the bill.

In January, President Obama called such irresponsible and blatantly self-serving Wall Street bonus activity in the face of the industry's massive financial crisis "shameful." And now we have Treasury Secretary Tim Geithner angry as well, demanding that AIG reduce the current round of bonuses that the company claims it's legally obligated to pay because they were promised and accrued early last year before the company's financial troubles surfaced. But an "angry" Geithner is about as intimidating as Doogie Howser, and AIG's essentially told him and the administration to fuck off, much as it did last Fall when, days after receiving it's first Federal TARP money, it threw another lavish $400,000+ "retreat" for it's executives and clients.

In fact, the U.S. government has shelled out trillions in bailouts and guarantees, yet has been utterly impotent in getting these toxic-asset-plagued corporations to explain where the money's going, and/or to stop rewarding failure with million-dollar bonuses. The only real toxic thing here is the continued arrogance of companies like AIG.

One of the reasons they gave for having to pay out the bonuses, besides "legal reason" is that they need to retain their talent.

I'm distant from Wall Street, so please correct me if I'm wrong, but shouldn't we be calling their bluff? Where does this "talent" think it will go to next? I've heard "foreign companies" but are they not doing equally as bad. Isn't the "talent" they have now completely obsolete????

Would love to hear input from those more in the know

What's toxic is the continuing spinelessness of the Democrats/USA Government now personified by our President, Obama.

We're lending/giving the money; we make the rules.

The answer is EASY Andy----government should TAKE BACK the money---I should say OUR money. But Obama wont do that now, will he? Know WHY????? Because Obama was put into power by the EXACT SAME corporate elitists that he now supports! Hey Andy, did you see that filmmaker Alex Jones has a new movie out today call The Obama Deception? Why dont you watch it? Of course you wont watch it---you wont even post my comment!

Larry, you must stop ending every post with "you won't even post my comment!" I'm sure it's fun to bask in your persecution complex, but if you haven;t noticed, I have no problme posting your comments--whether I agree with them or not--so long as they are not filled with nastiness and ad hominen attacks. So, it's all up to you, brother. Just simply obey the rules of decency and civility like the others who post here regularly, and you'll be fine....with no need to continue with your standard ending.

Bonuses are destructive of companies. If you want to ensure shortcuts and finagling, give bonuses.

At the other end of the scale, piecework has the same problem. But at least the people doing piecework are mostly decent people who would rather do a good job and get paid for it. These Wall Streeters are thieves who pay themselves in this way because it makes thievery easier.

Larry, I watched "The Obama Deception" and found it childish propaganda that adds nothing to the national dialogue. Cheers.

When Life hands you Lemons...make Lemonade. This is an obvious shafting of the American people and the current administration by arrogant, greedy, selfish bastards who could give a shit about anything but their own pockets. So be it!

What needs to be done now is for President Obama to publicly demand that these bonuses be retracted, begin an investigation to demonstrate the administrations disgust at such actions and, if need be, let the damn thing go bankrupt. But you cant tell me that at least some of these bastards cant be found guilty of something and sent to jail. That would be a powerful signal to everyone that this administration is protecting the general public and wont allow this kind of thing to happen, unchallenged. If President Obama allows this kind of thing to go unchecked it will be the beginning of his downfall.

As an Obama supporter I admit to being more than a bit disappointed at the way the administration -and Congress - has handled this.if the reports I have read are true, why in the world did the restrictions on the bonuses, sought by Hayden and Snowe, be eliminated from the final bill? Our Pres and Geitner have got to do a better job at policing these back room deals by the Senate. If they knew and tacitly blessed the removal of the restrictions, then we need to hear why. This administration and the dems in Congress MUST prove themselves better than the dirt in the prior administration.

A few comments:
1) Obama and every politicians knew about the bonuses when they were voting for the stimulus package.
2) Bonuses are not what they seem to be - they are partly withhold salary from last year.
3) It was all done within the legal framework: is it really good come up with a new tax after you've been given money?
4) How exactly is the money going to reach back the taxpayers?