Obama's Iran Strategy is Not Appeasement 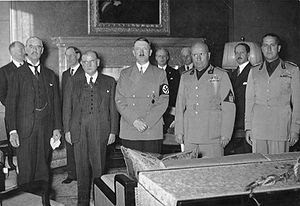 Merriam-Webster's dictionary defines appeasement as "to buy off (an aggressor) by concessions usually at the sacrifice of principles."

The cries of appeasement from hard-core right wingers over President Obama's olive branch to Iran this past week are unjust, misguided, myopic and just plain foolish.

Let's take a step back for a quick moment for a little historical context. The political figure whose name is most synonymous with appeasement is former British Prime Minister Neville Chamberlain (1937-1940), in particular for signing the Munich Agreement in September 1938, allowing Adolph Hitler's Germany to annex the Sudetenland region of Czechoslovakia. The co-signers were Germany, France and Italy. The cowardly treaty, which unofficially became known as the Munich Dictate or Munich Betrayal, made everyone happy of course except the Czechs, and it also infuriated Hitler, who felt pressured into participating in the sort of bourgeois diplomatic ritual he utterly despised. He held Chamberlain in contempt as a result. Appeasement didn't stop Hitler. In March 1939 Germany invaded the remainder of Czechoslovakia and began its march across Europe. It began its Blitz of England in September 1940. Chamberlain and "appeasement" are infamously and inextricably tied forever.

To draw parallels between Chamberlain's foreign policy failures and Obama's attempt to engage our enemies is patently unfair and irresponsible. To understand why, it's critical to have some modern context. We've just been through eight years of disengagement by the Bush administration. We had a reckless, testosterone-starved Jesus-driven cowboy march into the White House declaring Iran, North Korea and Iraq the "Axis of Evil". From virtually the get-go, Bush's foreign policy strategy could be summed up in just a few short words: U.S. good, everyone else bad, enemies really bad. Therefore, you don't talk with your enemies, you don't negotiate with your enemies, you don't enjoin your enemies. Instead, you antagonize your enemies, you motivate and inspire your enemies, and you embolden and strengthen your enemies through big-stick rhetoric and cowboy swagger. Oh, and you bomb the shit out of them for no justifiable reason (that would be Iraq for those of you who are having trouble following this lefty diatribe). And in the process you damn-near alienate every one of your allies and severely tarnish America's reputation for diplomatic greatness. Might even say you make America hated throughout the world.

So it's no shocker that perhaps it's time for a new strategy. A policy of engagement, whereby the united States uses its diplomatic powers and not just its military muscle. A foreign policy centered on the negotiating table and not some arrogant frat-boy's bully-pulpit. Thankfully, we now have a president who gets it. A president more interested in world peace than proving to his daddy that he's not the colossal fuck-up he always thought, or that the history books will soon surely prove.

What Obama did last week was brilliant. All of it. From going on the Jay Leno program and speaking directly to the American people (pissing off the mainstream media, which tends not to like being marginalized or circumvented) to addressing the Iranian people who, by the way, are 70% under the age of 30 and are much more Westernized than you would think. Obama bypassed Ahmadinejad and the Ayatollah Komenei much in the same way he did his end-run around the American press. Oh this Obama guy's smart, alright. He didn't beat the Clinton machine and become the country's first black president, at 46, because he lacks vision.

And that vision says, let's talk to the enemy. Let's engage them. Let's bring pressure on their governments by opening a dialogue directly with their people. Let's negotiate, but let's not forget our goal of protecting America, nor our unyielding commitment to use force when all else fails.

As John F. Kennedy famously said, "Let us never negotiate out of fear. But let us never fear to negotiate." Amen.
Posted by The Ostroy Report at 7:19 AM

Andy, I cant speak for the rest of America, but I wasnt pissed that Obama went on the Tonight Show because Im right wing---Im not, I was pissed because we are in a economic crisis and here we have the President making NCAA tournament picks and appearing on late night talk shows. I dont want the President schmoozing it up with Hollywood celebs when the country is in the shitter, I want him in Washington fixing it. If McCain had been elected and HE went on the Tonight Show, you would be doing stories on how thoughtless that was. Theres a REASON why Obama is the FIRST EVER sitting Prez that has appeared on a late night talk show---because its BAD TASTE to do so---and the he makes fun of the special olympics---something also completely ignored by the left! If Obama really wanted to "reach out to the American people"--go on TV at 8pm and make a speech (I believe they're called State of the Union addresses)---not 1130 at night on a late night comedy show!

What IS appeasement is allowing the "fat cats" to buy the toxic products rrom the banks with the gurantee from the Gov/Obama's Asministration that if it goes well they profit and if goes badly the taxpayers' suffer the loss. The purchase price is guaranteed to them by the FDIC to assure the Wall Street gang that THEY will suffer no loss -- only US.

Larry writes: we are in a economic crisis and here we have the President making NCAA tournament picks and appearing on late night talk shows. I dont want the President schmoozing it up with Hollywood celebs when the country is in the shitter, I want him in Washington fixing it.

Probably has sex with his wife, too, and plays with his children. How dare he, when the country is in such dire straits.

I think we can safely assume that you had no such criticsm for the previous occupant of the white house, who put the country "in the shitter," and who racked up countless months of vacation time in Texas as his intelligence agencies repeatedly tried to tell him to pay attention to the threat of terrorism, which of course eventually found him reading a children's book to a classroom in Florida. By way of reminder, he froze like a crashed computer at the time, and it took a series of whispered nudges to get him out of the chair and onto a jet, where he spent the next day or so cowering.

If you did, kindly provide a link to where you say so. Otherwise, you're revealed as simply a dishonest wambulance chaser, and should consider just shutting up until you can add to the discourse in good faith.

Spot on Tom! Damn those guys like Gingrich, Barr, Livingston, Craig, Troy King who cheated on their wives! Oh wait, they're Republicans! Sorry!

Larry, I did manage to catch your comment of 5:53pm before Andy deleted it-- as well he should have.

It contained at least four embarrasingly obvious lies drawn not from news but from wingnut websites, and after composing a reply patiently identifying them for you, I refreshed the page in order to post and noticed that your nonsense was deleted.

Count yourself lucky, Sonny. Andy has graciously spared your nose from being rubbed in your own shit again.

At least 4 lies, but yet you didnt debunk ONE of them. Why should Andy delete my comment? It broke NO rules--he just didnt LIKE it--and since he has no ammunition in his arsenal to respond with FACTS, he deletes it! Why cant I express an OPINION on here when it has broken NO rules? Ive exposed Andy Ostroy and he damned well KNOWS Ive exposed him, thats why he ignores me. Rahm Emanuels father a terrorist is a LIE? Thats funny---then why does Andy DELETE it rather than ADDRESS it? I get people lying on my site every so often and I respond back to expose they are liars---I dont DELETE them. Deleting commnts (when they have broken NO rule) only shows ONE thing: that you cant handle responding to a factual comment. Please giveme ONE source that debunks the fact that Rahm Emanuels father was a terrorist! Did you know that after Obama was elected and it was all over the net about Rahm Emanuels father being a terrorist, that wikipedia DELETED the page on Benjamin Emanuel (his father)??? Hmmmm. Wonder why. Im sure Andy could tell you why! Again, Ive broken NO rule of blogger or of Andy's policy, and watch me be DELETED.

Larry whines: At least 4 lies, but yet you didnt debunk ONE of them. Why should Andy delete my comment?

1) You claimed that the GIVE Act mandates community service. It doesn't. If you still feel that it does, you have only to quote the language in the bill saying so, but you won't because it doesn't exist.

2) You claimed that Obama promised to have all troops out of Iraq within six months of assuming the preidency. He didn't. If you still feel that he did, you have only to link to a transcript of him saying so, but you won't because it doesn't exist.

3) You claimed that Obama sent 70000 additional troops to Afghanistan. He didn't. If you still feel that he did, you have only to provide a link to a reputable news report saying so, but you won't because no such report exists.

4) You claimed that Obama has broken every campaign promise he made. He hasn't. Obviously. Hyperbole is by definition a lie, dummy.

Finally, Rahm Emmanuel's completely irrelevant father is a Chicago pediatrician born in 1927, who served as a medic in the Israeli army in 1948. Benjamin Emanuel's wikipedia page was deleted, or rather merged with that of his son, Rahm, because he is non-notable, except for being discussed on the internet by anti-semitic dolts who believe the jews are behind the 9/11/2001 attack on the world trade center.

If merely being discussed on the internet is what makes one notable, then I should have a wikipedia page.

You are entitled to your own opinion, of course, Larry, but not your own facts. Andy was perfectly right to delete your comment for the number of lies it contained if nothing else.

I did not visit your blog, and never will unless by accident. You're just one more wingnut standing in the street shouting at the rain with your pants down around your ankles, and Andy did you a kindness in deleting your comment.

Ok Larry, you have been reported to Blogger. They are going to monitor your activity on this blog, and if you persist in clogging it repeatedly with angry, off-topic racist, anti-semitic posts, and acting in a harassing manner...despite my repeated requests for you to stop...you are going to lose your blogger membership. They will take you and your own blog down. So, have your fun, pal, but I'll still be here long after you're gone. Take my advice...got something to say...whether you agree with me or not? Join the discussion and stay on topic. respond with civility, and you will not have a problem. Lots of folks post here who disagree with me and they have no problem and their posts are not rejected. Yours are rejected for the reasons I've stated to you countless times. But that's irrelevant now. And please don't post the Terms of Service here to try to convince me or anyone else of your innocence. The only people you have to convince now are the Blogger.com staff, who'll be the ultimate judges of your behavior on this and any other blog from now on. Good luck. Be smart.

Sorry about setting off one of your comedy relief wingnuts, Andy, but nevertheless, I gotta say--