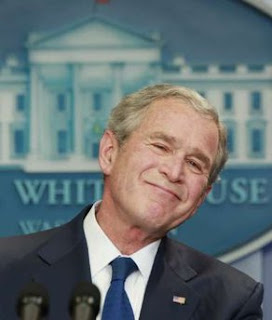 I have a friend. We'll call him "Byron." He lives out West and we've been close pals for over 25 years. We have a lot in common, except when it comes to politics. He's a die-hard conservative. A Republican apologist. A partisan stooge, as I affectionately call him. So it comes as no surprise when he refers to the U.S.'s current economic woes as the "Obama recession." Interestingly, he's been calling it that since early December, despite the fact that Barack Obama had yet to take office.

We know that Republicans have a hard time with accountability. Or with giving credit where credit is due. We've heard the relentless whining about how 9-11 occurred on George Bush's watch, but was the result of Bill Clinton's failed anti-terrorism policies. Or how Bush inherited Clinton's recession, or how Clinton was gifted with the Internet boom, which conveniently and dismissively explains how he created 22-million new jobs during his presidency and presided over one of America's greatest periods of economic prosperity.

So against this backdrop, the Obama recession makes perfect sense. But why stop there? With this week's huge stock market gains stemming from the spate of semi-positive news in the housing, banking and retail sectors, why not call this run-up the Bush Rally? And when the economy begins to grow, we can call that the Bush Recovery .

Now look, don't go giving us any of that reality-based bunk about how "Bush is no longer president, so how can we give him credit for Obama's economic turnaround when and if it comes?" To guys like Byron, that sort of logic just gets in the way of good old-fashioned Republican spin.
Posted by The Ostroy Report at 7:51 AM

it will remain an eternal mystery to me how anyone can say that one of the things Bush did was keep us save,,after 9/11!! He was given a special warning about OBL determined to strike in the US, he does nothing to find out where and when, goes on vacation and 3000 are killed. Yet keeping us save. EXCEPT OF ONE INCIDENT, is trumpeted as one of his greatest accomplishments! Aside from that ONE incident Lincolns body guard was a hell of a good body guard!!

Also, when the Republicans controlled Congress they were in the majority and the Democrats were in the minority. But when the situation reversed in 2006, this is what we get, literally a real boner:

'“As I told my colleagues, we don’t have enough votes to legislate,” said Representative John A. Boehner of Ohio, the Republican leader. “We are not in the majority. We are not kind-of in the minority; we are in a hole.'

If you honestly can't admit you are in the minority Rep. Boner,then that hole you're in must be your grave.

I will never forgive or forget what the Republicans have done over the last 30 years. Yes, 30 years. Our destruction started with Reagan. I, for the most part, have lost a brother to repub politics. He is a rabid rightie. My other brother and I just shake our heads. We were not raised that way. He listens to the junk that Rush and Hannity spit out weekly and believes it all.
We must change things now while we have a chance. The Baby Boomers have been screwed big time. I can't help but wonder who did they vote for during the last 30 years? You reap what you sow.

I wonder what Republicans say to all the friends and relatives of those they convinced to fight and die to stop Sadam Hussein from getting WMDs?
Everyone thought the same? Opps? Shit Happens? Shut up and support the troops?
VietnamEraVet