Obama Does Leno. Here Are Some Other Shows Worthy of President Cool 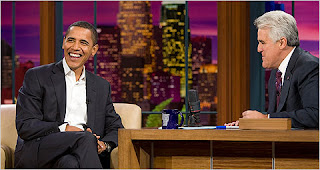 President Barack Obama went on national television last night again. No, it wasn't a Town Hall meeting or a press conference or an address to Congress. It was to sit and whoop it up with Jay Leno, host of NBC's The Tonight Show. I alternate between thinking this was the most brilliant strategic move by perhaps America's most telegenic, media-savvy president ever, and, what the hell is the President of the United States doing on a friggin' talk show? What's next, Letterman's Stupid Human Tricks?

In any case, since our mad-hip president has decided to bring his mojo to late-night television, I thought it might be fun if he went even further with this unprecedented reach-out-and-touch-middle-America campaign and did the following shows as well:

WIFE SWAP: Let's send Michelle to the Heartland and a beer-chugging, Bible-thumpin' NASCAR-mom to the White House and watch the sparks fly!

IN TREATMENT: Who wouldn't want to watch The O-Man sit on the couch and dish to Gabriel Byrne about the enormous pressures of life, love, work and "How come Rush Limbaugh doesn't appreciate me?"

ENTOURAGE: C'mon, Vince and Barack? They're the two coolest dudes on the planet! And think of all the fun it'd be watching Turtle get into some serious White House mischief while Drama hits on Hillary.

DANCING WITH THE STARS: Ok, Obama's not the smoothest dude on two feet, but neither is Steve Wozniak. Obama and Edyta. Now that's cool....

HIGH-SCHOOL REUNION: Watch Barack and his buddies sit around the Hawaii mansion reminiscing about the good old days smokin' weed and doing blow. It's all fun and games until a mystery guest shows up in the limo to spoil the party. It's Karl "Turd Blossom" Rove...

HANNITY: I want to see this knock-down, drag-out verbal smackdown once and for all. The Hannitizer won't know what hit him.

AL ROKER'S DINER DESTINATIONS: I have nothing witty to say here. But wouldn't it be a freakin' riot watching Al and Barack hangin' out together on a greasy-food-eatin' road trip?

WHO WANTS TO BE A MILLIONAIRE: Will help prepare Obama for once he leaves office and miraculously becomes a gazillionaire like all other exiting politicians.

TWO AND HALF MEN: Watch the jokes fly as Obama, Joe Biden and Limbaugh (the half man) yuk it up...

HANNAH MONTANA: Barack, Malia and Sasha hang with Hannah and Billy Ray on a fun-filled tour of Washington. But then Billy starts singing "Achy Breaky Heart" and ruins everything...

WHEEL OF FORTUNE: Maybe he can turn the economy around with a little spin of that famous wheel?

48 HOURS MYSTERY: Obama and the investigative team attempt to figure out what the hell happened to our country these past eight years.

THE HONEYMOONERS: Obama, Biden and Hillary share a run-down tenament apartment in Brooklyn during the First 100 days in office....

SURVIVOR: Need we say more?
Posted by The Ostroy Report at 7:38 AM

What about 'Dirty Jobs?' The disgusting sleaze of DC is enough to gross out anyone. Ewww look, it's all over your birth certificate.

Here is the full video of Obama's Joke:

Obama needs to go on Dr. Phil get in touch with his emotions. I didn't believe his anger at Rev. Wright; and his emotions don't register when he says he's furious over AIG. He's so cool he doesn't feel anything, it seems. And he has trouble empathizing. He wasn't aware of his offense about handicapped people until he got off the air and an aide alerted him. Yws, his next TV stop should be Dr. Phil so the country can see his "break-through".

Attention: readers of Andy's blog, be aware that your hero Andy Ostroy is a complete fraud. Read about it all on my blog. Here's the link to my story on Andy the Fraud:

He has been completely ignoring the fact that Rahm Emanuels father was a terrorist in the 1940's. He has deleted any comment I made about it 6 or 7 times now and claims Im "off topic" but never provides a way I can be ON topic. I have proven that he does not censor because of violated rules, but he will delete and censor just because he doesnt LIKE something said---something he wants to avoid and ignore. Read my story folks.

Why have we not heard ONE word about HR 1388, the GIVE act of 2009, which is Obama's plan to create a national civilian security force and FORCE everyone ages 18-25 to do 3 months of government service. Rahm Emanuel even talked about this in his 2006 book The Plan----he even said on C Span that Americans that we have to EARN citizenship, and that its not an automatic privlege. Its NOT??? News to me! Hold onto your kids people---Obama wants to start a National Civilian Security Force which is very much like the Hitler Youth. Look up HR 1388, it just passed in the house days ago. Mostly DEMOCRATS voted for this bill. The major problem with this bill is: we dont owe the government ANYTHING. WE are the government. Read the Constitution, WE THE PEOPLE are the government. The people in Washington are our servants, we RULE them. They are our servants, not our masters. They owe US, not the other way around. Call your Congressmen and oppose this bill. Its involuntary servitude---its WORSE than a draft. A draft is only in time of war, HR 1388 is at ALL times. Emanuel said that this will involve uniforms, jumping jacks and military-style training. This is serious people. Its not in the news and you wont hear shit about it on left wing blogs. The AIG bonuses story is completely blocking this story out--and Im sure Andy will keep deleting this. HR 1388, look it up.