A Real Simple Solution to the AIG Bonus Mess 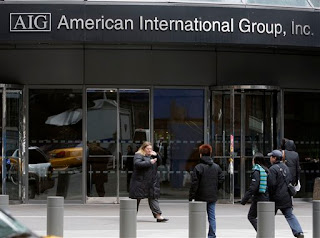 Adding insult to injury, news broke over the weekend that instead of the previously reported $165-million AIG handed out in retention bonuses, the total is actually $218-million, an additional 30% kick in the taxpayers' groin. The AIG saga seems to get worse by the minute. On the one side, we have a mounting populist movement seeking everything from a return of the bonus money to public flogging of the executives who took it. And on the other side we have the Wall Street sympathizers and legal junkies who cry "witch hunt" and vehemently oppose retributive measures such as 90% taxes on the money, prosecution of "fraudulent" behavior, and most important, the voiding of the employees' contracts which promised the bonuses.

To be sure, for most Americans, the AIG bonus debacle in particular has come to symbolize the years of unprecedented greed and de-regulated hijinks on Wall Street by reckless, credit-default-swapping, derivatives-dealing cowboys who damn-near single-handedly caused the collapse of the U.S. financial industry. And as the average Mom and Pop fears for their jobs, their homes and their savings, it's easy to understand their gargantuan outrage and frustration with the current system in which these arrogant bankrupters are rewarded for their miserable failures with taxpayer money.

But there is a simple solution which is not only fair, it makes sense. In a nutshell, rather than allow these bonuses to remain in tact or to take them away outright, how about deferring them until the companies and their troubled business units turn their financial fortunes around and become profitable? Now that's a novel concept, huh? Tying compensation to performance. Let's dangle the proverbial carrot in front of these high-flying Downtown deal-makers. You wanna get that million-dollar bonus, pal? Earn it, dammit! Stop losing money and start making it. And make enough to start paying back to your boss, the American taxpayer, the $200-billion your company needed in bailouts to stave off death stemming from your gross irresponsibility and high-risk activity. Then, and only then, will we be ok with you taking that huge paycheck. Whattya say, pal, deal?

Lastly, it's time to dispel a few of the biggest myths surrounding the AIG saga:

-"The contracts are legal and cannot be voided:" It's quite the convoluted argument that these employees have a valid legal claim to these bonuses when in fact their contracts would've been voided through bankruptcy had the U.S. government not bailed out the company.

-"We need to retain these people so they don't leave and go elsewhere and we can stay competitive:" First, where the hell are these folks going? Who's hiring on Wall Street? And, I know tens of thousands of unemployed Wall Streeters who'd gladly take these jobs left behind by the unretained.
Posted by The Ostroy Report at 4:19 PM

This seems like a reasonable solution for all, if they really have to get the bonuses. It should also be added that they don't get the bonuses until the millions owed by AIG in back taxes are paid.

As an aside, David Boies, Hank Greenburgy's attorney was a guest on Sean Hannity's TV show and I understood him to say that the bonus payments could have legally and with no hassle been avoided until now that the clause has been added. There would have been no law suits or legal action from AIG with any merit before the fools in Congress added the clause.

It's not really about the money, though. It’s about making people who get personally paid so much undeservedly, whether as bonuses or not, when that money could have been put back into industries to provide jobs, steady, reliable shareholder returns, needed technological progress, etc., get off their social pedestals and stand eye to eye with their fellow ordinary citizens, and be told to their faces that they are nothing special.

Plainly Congress doesn’t understand this, and instead focuses on the money.

These people should have to face exactly the same hardships as ordinary union and non-union households are asked to suffer. Deferring their pay is beside the point. They ought to be pulled down from the clouds, returned to normal society, and made productive.

Also many of them should be treated for compulsive gambling; this should cost them nothing, and be charged to Universal Medicare.

I really don't understand how this mess happened. If the Treasury Dept. was worried about legal consequences and told Dodd, why wasn't everything stopped until legal advice was obtained? Can't this administration get legal advice from a reliable source? Obama is a Constitution scholar and lawyer and he, apparently, did not evem read the bill and signed it blindly. Shouldn't the President read the important documents he signs into law? Had he read it or even had he been asked, he perhaps could have answered the Treasury Dept's legal concern. WHO IS IN CHARGE????

Why didn't all the Congressmen read the document before voting for it? We have a totally incompetent, lazy government, if not crooked. Obama should shelve his personality tour and oversee his dismal appointees.

Obama said during the campaign that he was not a "details man"; that he designated others to attend to that. Well this is one thing he didn't lie about. He has sure left it to others to do the work while he travels and pleases crowds.

Shocked at the NY Times op ed pieces today. Everyone of them, including Krugman criticized Obama and cast doubt about his competence. We're in big trouble.

Why aren't these people in prison? What they committed was fraud. What they're committing now with "we need to pay these guys bonuses because they're the only ones who can unravel the mess" is extortion. Oh, and some of those people were paid "retention bonuses" after they had left their jobs.

Put the greedy bastards in prison and make them work on fixing the mess instead of making license plates. No bonuses (except for the rough sex, of course). No possibility of taking a "retention bonus" then skipping. And we only let them out after they've fixed everything (including paying back every taxpayer dollar).

-"The contracts are legal and cannot be voided:" It's quite the convoluted argument that these employees have a valid legal claim to these bonuses when in fact their contracts would've been voided through bankruptcy had the U.S. government not bailed out the company.

Ostroy, Ostroy, Ostroy. You liberals have spent years making damn sure that in courts of law, legal finesse comes before common sense and what is right. Now you want the courts to go by common sense?

If they try to take away the bonuses, this boondoggle will cost $218 million plus more millions in legal fees.

There is a resonance here with the implicit pardon of war criminals who are captured and then turn.

Don't know if you follow Helen Mirren's adventures as Detective Superintendant/Chief Inspector Jane Tennison in the brit "Prime Suspect" TV productions, but the most recent had her faced with a similar dilemma, in which:

A Bosnian immigrant has been murdered. Tennison's prime suspect is a Serbian immigrant, a former paramilitary leader who raped the young girl repeatedly before ordering the massacre of her family (which she escaped).

The British government intervenes, halting Tennison's investigation and swearing her to secrecy. The Serb is an asset to the gov, they reveal, having turned up many of his fellow war criminals.

And Jane Tennison goes after the little fucker anyway, saying:

"Maybe turning a blind eye to torture and murder will bring in bigger and better fish-- I don't know about that. I can only deal with what is in front of me."

I suspect, Andy, you must know exactly how she feels.