AIG: Time to Hire the Worst and the Dumbest 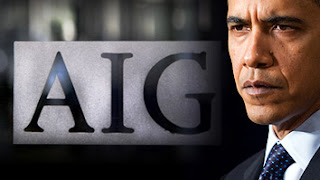 A staggering $60-billion, the biggest quarterly loss in global corporate history. Pushed to the brink of insolvency resulting from near-criminal high-risk financial racketeering by a bunch of reckless, greed-drunken Wall Street cowboys. Needing rescue from the U.S. Government to the tune of $200 billion to avoid death. So, this is what "the best and the brightest" brings ya, huh? If that's the case, for AIG (the Arrogance Incompetence Greed company), perhaps it's time for the worst and the dumbest to take over. Surely they can't do any worse.

What a week this has been following the news last weekend that AIG gave out another round of retention bonuses to these Masters of Failure. Retention bonuses, mind you, that went to virtually the entire unit responsible for this debacle, including 52 of these "can't live without 'em" geniuses who shamelessly took the money and ran. These folks are best and bright alright. They somehow figured out a way to obtain retention bonuses without having to be retained, thus perpetrating their shady deals right up to the very end. Incredibly, the now-80% taxpayer-owned AIG doled out millions in retention bonuses and 12% of these incompetent crooks walked out the door anyway. It's astounding and infuriating.

"Oh, but we had to pay them...it was in their contracts." Bullshit. Contracts are meant to be broken. They're either broken and/or renegotiated every day. That's why God created cutthroat lawyers. Otherwise they'd be doing real estate closings all day. Auto workers, teachers, civil servants, athletes, etc renegotiate their contracts all the time depending on changing circumstances. Why then is there a double-standard for Wall Street? If ever there was a justification to renegotiate, this is it.

The central argument being made by Treasury Secretary Timothy Geithner, Fed-appointed AIG CEO Edward Liddy, legal scholars and others is that the company was/is legally obligated to pay the bonuses, and that we must honor and respect the rule of law which protects the sanctity of these contracts. Technically correct. But in reality, a bunch of rubbish. If the government and AIG (one and the same now) really wanted to recoup these bonuses, there's several means by which to do so:

-advise the employees that while they can keep their "legally mandated" bonuses, their future total comp will be $1 until the bonus money is recouped;
-since the unit they work in is a gross financial disaster, thus a performance breach, inform them that keeping said bonuses will be grounds for termination if they do not return the money;
-inform them that if they choose to keep this money, there will be no more TARP bailouts. That keeping these bonuses is akin to AIG shutting down...unless it will be able going forward to run on operating income and on the strength of its own balance sheet;
-claim that the bonuses are voided due to their fraudulent origin. Didn't AIG know of its dire financial status early last year, and thus had no right to give away money it didn't have;?
-argue that there would've been no money for these bonuses had the U.S. Government not stepped in with TARP funds to stave off AIG's bankruptcy, an event which would've voided these contracts.

Some advice to the Wall Street happy hotshots: don't go spending that "hard-earned" bonus money just yet. As the moral outrage and public outcries increase, I suspect the pressure will mount so high that the Obama administration will, with the help of people like New York Attorney General Andrew Cuomo, ultimately succeed in finding its loophole to recover this stolen taxpayer money.

And one final word for the Obama administration: get some damned seats on AIG's board, as well as seats on any other board in whose company we're bailing out with taxpayer money. Ownership without board control equals corporate impotence, as we now unfortunately know.
Posted by The Ostroy Report at 7:04 PM

The bottom line here Andy is that this bailout money that WE THE PEOPLE did NOT consent to equals taxation without representation. This is what the freaking Boston Tea Party was all about. Did they ask YOU about bailing out these companies first? Did they ask ANY of us? NO, they didnt. They made the decision to bail out these companies and OBAMA SIGNED IT, WITHOUT our consent, WITHOUT "We the people". WE are the government Andy, not them, they are only supposed to REPRESENT us, not be our masters.

Know what Im sick and tired of hearing Andy? I am SICK of turning on the TV and hearing EVERYONE say "how can you reward incompetence?", "these guys ran their bank into the ground and they get rewarded?" and so on and so on. But YET, they got bail out money to begin with! When it came time to decide if they even received bail out money, why werent they saying the SAME things about their incompetence and greed then?? Criticizing them wasnt right when it came time to give them 700 BILLION, but when it comes to 170 million in bonuses then that's when its time to use the words "greed", "incompetence" and "failure"? Why did they get the money in the FIRST place if they are a bunch of failures???? Can anyone answer this??

On a side note Andy: Your blog has become dead. Months ago you were getting 25-40 comments on each story, now with comment moderation, you dont even get over 10 on MOST of them. Free speech is a good thing Andy.

What I want to know is who is running this President's administration. It is not Obama who spends all of his time "on the road" performing his act of charm with the theme "if you like, me trust me."

We knew it was Karl Rove and Cheney with Bush -- who's the shadow ruler of our country now? Who is making all of these terrible decisions and orchestrating the "cover ups"?

The problem with this is the inability to realize that AIG hasn't cost the taxpayers a cent. It was the corrupt political filth in Washington who robbed the taxpayers not anyone working for AIG.

I think the meaning of "taxation without representation" pertained to the fact that the colonies did not get a representative that they chose in parliament as per the British Constitution in the 1760s. The American public has received a say, through free elections. We are then represented by these elected officials to make decisions on our behalf. So we did in fact consent to the bail out funds being issued by proxy of our officials. Your analogy doesn't quite ring true even if you try to invoke the spirit of the sons of liberty to your argument. The stimulus bill (where the piece of legalese that allowed the bonuses) is not the Tea Act of 1773.

Before Ostroy's censorship this used to be a terrific blog with lots of different ideas fired by Ostroy's article. Now fewer people take the time to post, wait a day or so to read more posts and eventually lose interest. We're mostly adults We can "take" rading trash talk from a few.Can't you lift the restraints and let all participate?

This may come as a shocker, but this blog does not exist so that crazies can run up a hundred nasty, derisive comments every time I write something. There are thousands of people who read and appreciate what I write here and on Huffington--whether they agree with me or not--and my priorities are not with the few kooks who insist on hijacking the message board and doing viscious battle with each other every 5 minutes. Those of you who write vile, racist, anti-semetic things--or horribly cruel things about the dead--have no place here. Being able to comment on my blog is a priviledge, not a right. Perhaps I will soon lift the moderating and see what happens. If you all behave yourselves, then fine. But we'll switch right back to comment moderating the second I see the same sort of juvenile nonsense that took over this board before. It's all up to you, not me.

Comment moderation has been lifted. I am hereby trusting my mature, responsible readers to engage in civil debate. But again I warn, a return to the days of hate-fiiled nonsense will bring an instant return to comment moderation. Ball's in your court, gang.
Andy

Thank you Ostroy. As a long time appreciative reader of your blog I'n glad censorshp is over I think the vitriol and insanity in readers' responses was during the last days of the election when everything was very tense between opponents. If the "crazies" do continue to offend us, I think that if none of us responds to their insane, vicious remarks they'll stop since their egos require being noticed. Hope I'm right.

Larry, last warning: if you leave one more disruptive, harassing post on this board I am going to report you to Blogger.com, and they will ban you from their site...and you will lose your own blog. Be smart.