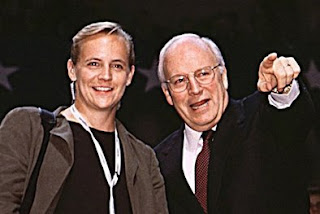 So Dick Cheney has come out in support of gay marriage. Big fucking deal. If anyone thinks that, at his core, Cheney actually cares about homosexuals and their civil rights or lack thereof...I have some cabins in the mountain region of Pakistan they might be interested in buying.

Earlier this week Cheney said he doesn't have "any problems" with same-sex marriages, adding "I think, you know, freedom means freedom for everyone. I think people ought to be free to enter into any kind of union they wish, any kind of arrangement they wish," and said the issue should be handled at the state level.

Cheney's sudden love and respect for gays is 100% about his daughter Mary, period. Do you honestly think that before she exited the closet, and dating back to his Bush 41 and Nixon days, that he was a passionate proponent of gay rights? If so, I suppose you also think Newt Gingrich and Tom Delay hang out together watching "Project Runway" while feeding each other fondue?

To be sure, what we're witnessing here is classic self-serving, hypocritical, double-standard, Republican "do as I say not as I do" rationalizations:

"I'm against gay marriage until I learn that my kid's gay"

"I'm anti-abortion until my kid needs one"

I'm a military hawk until my kid dies in battle"

I'm pro-guns until it's my husband, wife or kid who gets shot by one"

Cheney's support for gay-marriage is the most disingenuous advocacy ever. He's a rabid conservative on every single other social, environmental and fiscal issue, and is no more a genuine fan of gay-marriage than I am a proponent of Joey Buttafuoco-style hetero unions.

If I was Mary Cheney and my first glimpse of man was Dick Cheney, I'd turn gay too.

congrat's Tom. You are the first poster in this blog's 4-year history to make me laugh out loud!
Andy

I meant to say "glimpse OF a man" but Im sure you understood that. Glad I could help spread joy and happy to make history!

It's been debated whether people are born gay or they choose to be gay. It's instances like this (being the daughter of the Dickster) that I would side with 'choosing' it.

Andy, why doesnt he go away? Why have we seen the Dick more in the last 3 months than we saw him the entire 8 years of his Presidency?....ehhh, I mean Vice Presidency...ehhh, not really.

I genuinely believe that Republicans have great difficulty with abstract concepts. Their apparent hypocrisy may just be that they are mentally unable to understand something unless they've experienced it firsthand. It works for so many issues: foreign policy driven by xenophobia; racism driven by parochialism; homophobia driven by . . . oh, that one doesn't work . . . too many closeted creeps in the GOP. But you get the idea.

Yeah I always found it a bit odd that Cheney was supposedly pro-gay yet never did a thing to help gay people while he was one of the most powerful VP
s in history.

You know, when it would have done some good.

I am sure Cheney loves his daughter. I just think he loves power more.

But still kudos to Dick for showing at least as much compassion as some frogs. Someday cons will move up to human levels.

Cheney is a politician and from what I gather, a neo-con, plus he has a lesbian (aka "gay") daughter and I'm sure, other challenges in his contrived life.
I'm not a fan but Cheney did in fact come out in support of gay marriage just as Nancy now favors stem-cell research...
I guess that a lot of things don't hit us until they literally HIT US and make us think and reconsider but as political figures, you just cannot learn and/or change your mind without being slapped in the face with it.
Trust me, I'd slap certain politicos in the face with wild abandon if I had the chance and Dick might just be one of them... I don't like him. I don't respect him and yes, I think that this is a lot about his daughter but well Andy, he did in fact come out in favor of gay marriage so that's a good thing.
We "Liberals" who are now in power need to watch our glee a bit and not abuse it or gloat too much or the American People will turn on us just as they did to the now-leaderless/directionless Republicans.
So, be careful Andy and try to find some respect and kindness in that extremely smart head of yours.
Temper it a bit and try to realize that "they" were and are not completely wrong and "we" were not and are not completely right (um; correct)...
In passing; I'd be married now if it had been possible however, it wasn't in the cards and due to the fact that my partner is not a US citizen, he's now in another country, moviing on with his life as we all must.
All the best and keep on keeping us informed and those of us who truly are, will continue to read between the lines...
Cheers!