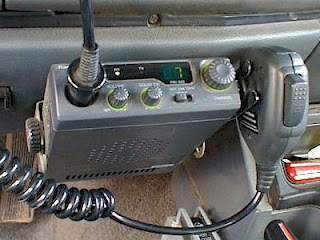 Those were the hilarious words shouted Monday night by the actor Will Ferrell during a silly bit on Conan O'Brien's debut as host of NBC's The Tonight Show (which was a solidly funny and successful debut, btw). But it got me thinking: how cool would it be if instead of typing away in such an impersonal manner on Facebook and Twitter, millions of people used CB radio's and even the phone!

For those of you young people out there who are a bit confused right now, CB radios were a big fad in the 1970's. We had 'em in cars and in our homes, and people would actually shape their lips and tongues into various positions to form words in an effort to communicate through actual spoken language. I know, I know, crazy, right? And that other piece of equipment I mentioned, the phone, is also used for verbal communication purposes. Think of it as sort of a Facebook or Twitter with sound. All those silly "status" comments you make to each other--and to no one in particular--can actually be made live...and get this, the other person on the phone can actually respond right back to you in, like, a conversation! It's really cool! You don't even have to make any additional purchases either. That little gadget you carry around for all that texting, picture-taking, web browsing and music downloads? It has a frickin' phone in it too! I'm serious, you can actually talk on that damned thing. I know...it's insane. It's like getting a whole other "app" for free!

Seriously, kids, talking to someone is actually a lot of fun. You'll get to hear tone, inflection, humor, sarcasm...and can have a solid back and forth which you might just find quite engaging. Now go ahead and try it, and let me know what ya think!


On another note, we could use your help at The The Adrienne Shelly Foundation. We're a 501 c 3 tax-exempt, non-profit organization dedicated in my late wife's honor, and with a simple mission: supporting women filmmakers. Adrienne, who wrote, directed and starred in the hit film WAITRESS, was killed November 1, 2006. Through the Foundation, her commitment to filmmaking lives on. We've established scholarships, grants, finishing funds, screenwriting fellowships and living stipends at NYU's Tisch School of the Arts/Kanbar Institute of Film; Columbia University; American Film Institute; Women in Film; IFP; the Nantucket Film Festival; the Tribeca Film Institute; and the Sundance Institute. Your generous contribution will go a long way towards helping us achieve this very important mission. Please click here to make a donation. Thank you.
Posted by The Ostroy Report at 7:28 AM

:-)UR rite!, the current texting jargon isn't very helpful in engendering real communication.
Breaker Breaker 1 9! Come on! This here's Big Dog, what's yer 20 Big Apple?
Got some Smokey's in the rear view, hope to miss 'em on the flip flop!
Now this is an example of the discourse I recall from the CB days. It also required one hand to be used in holding the mike.
Somehow I don't think we really need to return to that so much.

CB revenue model: sell the CB, then go out of business.

I have a cell phone because sometimes I need it for work and in case of an emergency.

It is not joined to me at the hip. I must admit though if we had these when I was in high school, it would have been a blast.

Texting? I don't have it and don't want it.

I have had the most wretched day imaginable at work. Everything that can go to Sh** promptly did so. I came home and opened my email and saw this. It made me smile! Imagine that! Thanks, Andy.