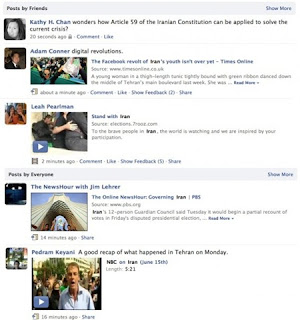 Been reading lots of comments from readers and bloggers here and on Huffington Post and elsewhere. Jeez, the self-importance of Twitter and it's loyal Twits is astounding. Do you really think the throngs of Iranian protesters would not know where to go without directions on Twitter? You think that the incredible miles-long mass of revolutionaries got there because of Twitter? I am utterly incredulous as to the credit being taken by Twits regarding their self-proclaimed role in this opposition rebellion.

Also, it's both arrogant and preposterous to claim that without Twitter people around the world would be lost in a news vacuum, unaware of what's going on there. I watch CNN, MSNBC and read the NY Times, Wall Street Journal, Washington Post, HuffPo etc...both print, and online....and feel like I'm pretty darned up to speed as a result. I don't need to know what's going on every 3 minutes. Nor do I need an incessant stream of photos of protesters every three blocks . I get it. What I don't get is the claim by Twitter and its users that they somehow are partly responsible for this incredibly emotional, inspiring and historic series of events transpiring in Iran. I've been writing for months about the mind-numbing narcissism demonstrated by those who post non-stop on Twitter and Facebook. Well, their self-aggrandizing role in the Iranian election upheaval is the ultimate display of this narcissism. Message to Twits: this revolution ain't about YOU!
Posted by The Ostroy Report at 2:44 PM