Obama's Speech to Muslims: More Humility and Statesmanship in Two Hours than in the Eight Years of Bushevik Arrogance and Bullying 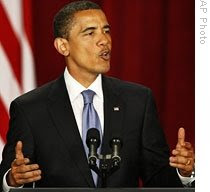 President Barack Obama traveled to Egypt Thursday and delivered an historic speech to the Muslim world at the University of Cairo. For nearly two hours Obama spoke of the region's various unsolved crises--such as U.S./Islamic relations, the Arab/Israeli conflict, and terrorism--while extending an olive branch to both America's friends and enemies alike. It was a brilliant dissertation on accepting difference, overcoming challenges and achieving a lasting peace. And it was a much welcome departure from the Bush administration's eight years of reckless cowboy arrogance and bullying.

A few select highlights from the president's speech:

"I have come here to seek a new beginning between the United States and Muslims around the world; one based upon mutual interest and mutual respect; and one based upon the truth that America and Islam are not exclusive, and need not be in competition. Instead, they overlap, and share common principles – principles of justice and progress; tolerance and the dignity of all human beings...."

..."America is not – and never will be – at war with Islam. We will, however, relentlessly confront violent extremists who pose a grave threat to our security. Because we reject the same thing that people of all faiths reject: the killing of innocent men, women, and children. And it is my first duty as President to protect the American people."

..."Unlike Afghanistan, Iraq was a war of choice that provoked strong differences in my country and around the world. Although I believe that the Iraqi people are ultimately better off without the tyranny of Saddam Hussein, I also believe that events in Iraq have reminded America of the need to use diplomacy and build international consensus to resolve our problems whenever possible."

"So America will defend itself respectful of the sovereignty of nations and the rule of law. And we will do so in partnership with Muslim communities which are also threatened. The sooner the extremists are isolated and unwelcome in Muslim communities, the sooner we will all be safer."

..."No system of government can or should be imposed upon one nation by any other."

"It is easier to start wars than to end them. It is easier to blame others than to look inward; to see what is different about someone than to find the things we share. But we should choose the right path, not just the easy path. There is also one rule that lies at the heart of every religion – that we do unto others as we would have them do unto us."

Pretty incredible stuff, much as his now-famous 2008 campaign speech on race relations tackled a tough subject head-on and moved an entire nation. So, while the Cairo speech garnered much praise throughout the world, especially from the Arab community, the reaction here at home from the ravenous right was anything but laudatory:

"What President Obama did today was unconscionable," said the blathering Republican radio blowhard Rush Limbaugh, echoing similar sentiments from other conservatives in the media, Congress and in Washington political circles. Sure, when for eight years you're used to a daily dose of derogatory name-calling and inflammatory rhetoric, I suppose diplomacy and statesmanship sure do seem like despicable acts. And it surely makes for better partisan politicking to turn every Muslim into the enemy and use John Wayne tough-talk while hiding behind the American flag.

The truth is, we're not at war with Islam. We're at war with al Qaeda and other extremist groups. Yet Bush & Company shamelessly and relentlessly exploited the September 11th attacks to their political advantage and lumped the entire Muslim world into it's all-encompassing "evil doe'ers" bucket. Doing so certainly aided in the conflation of Saddam and Osama bin Laden. Of Iraq and al Qaeda. Of the world's 1-billion Muslims and the nineteen 9/11 hijackers. And it's going to take a while for the world's Muslim population to trust America again and be our partner in the fight against terrorism. Which is precisely the goal of Obama. His speech Thursday was designed to repair the damage caused by the Busheviks' one-stop-defaming, Axis-of-Evil mentality.

No more swagger. No more cockiness. No more inciteful hate-speech. It's time for the frothing extremists in our country to tone down the incendiary rhetoric, stereotyping and scapegoating and start supporting the administration's effort to rebuild America's standing not just within Islam, but all over the globe.

After eight dreadful years of George Bush's arrogant, polarizing, isolationist, xenophobic foreign policy, it's quite refreshing to have a president who's smart, thoughtful, engaged and passionate about building a true coalition for making the world a better place. But Republicans hate the fact that the world loves Obama. It's killing them. And they're working feverishly to undermine him and the administration's efforts to spread peace and goodwill rather than war and hatred.


On another note, we could use your help at The The Adrienne Shelly Foundation. We're a 501 c 3 tax-exempt, non-profit organization dedicated in my late wife's honor, and with a simple mission: supporting women filmmakers. Adrienne, who wrote, directed and starred in the hit film WAITRESS, was killed November 1, 2006. Through the Foundation, her commitment to filmmaking lives on. We've established scholarships, grants, finishing funds, screenwriting fellowships and living stipends at NYU's Tisch School of the Arts/Kanbar Institute of Film; Columbia University; American Film Institute; Women in Film; IFP; the Nantucket Film Festival; the Tribeca Film Institute; and the Sundance Institute. Your generous contribution will go a long way towards helping us achieve this very important mission. Please click here to make a donation. Thank you.
Posted by The Ostroy Report at 6:29 PM

Righties who believe only in being harsh and mean will never understand a statesman like President Obama.

And the bombing of brown people continues. I'll believe in "Change" when things actually change, not when some clown talks about it.

Brilliant commentary on a speech that deserves it. Obama is pure genius in making every person feel hopeful. Oh, I mean every person except for the weak-kneed, hate-filled conservatives who speak against everything Obama does and says.

Yet we continue to kill them vilify and threaten them on practically a daily basis...hmmmmm.

Sorry Ostroy but sucking ass does not equal statesmanship. I can tell you right now that this man that you are lavishing with adoration will be spearheading the destruction of Israel. I simply cannot understand why Jewish people like you are so suicidal.