The Freedom Cruise, Newt and the Gay Piano Player. Tales From Our Man-on-the-Inside 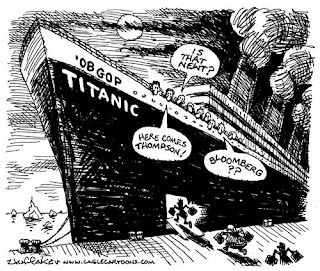 It's the Freedom Cruise and Conference, and it's been billed as a "10 Night Gems of the Baltic" excursion at sea sponsored by the Freedom Alliance and the National Rifle Association. It left port June 12 in Copenhagen, Denmark and returns to that city June 22 after sailing through various ports in Russia, Estonia, Germany, Finland and Sweden.

So who exactly is the Freedom Alliance? On its website, it states that its mission "is to advance the American heritage of freedom by honoring and encouraging military service, defending the sovereignty of the United States and promoting a strong national defense." As for the NRA, well, that's just an organization of he-man wannabes with small dicks who like to shoot shit up.

On the cruise's website, this week-and-a-half of nautical negativism is described as "Moderated panel sessions featuring our esteemed guest speakers...Plenty of chances to meet, schmooze and enjoy personal interaction with our special guest speakers. Exclusive Parties and Dining with our special guest speakers....Numerous private cocktail parties and evening smokers...A fully escorted cruise." I have three initial thoughts: (1) I would rather eat my own snot than shmooze this bunch of rich old myopic white men, and Michael Steele, (but then again, I'm not their target audience); (2) what the hell is an " evening smoker?"; and (3) given all the Republican sex scandals over the past few years, who knows what "fully-escorted" means with this dubious crew.

But we've been able to get a peak inside this very secretive and exclusive little boat ride from our man on the inside. "The Mole," as we'll call him, had this to say:

"There are many regular passengers, but here's the kicker. There's a lot of people on board from the Atlantis Group gay cruise company as well. Newt has been hanging out in the piano bar at night. The funny thing is, he is so anti-gay but he seems to love the piano player in the bar who is GAY!" (for the record, The Mole has not witnessed any actual homosexual behavior between Newt, the piano player or any other seemingly hetero conservative with a penchant for showtunes, but he sure does seem as smitten as Julie on "The Love Boat"). "I was getting some iced-tea yesterday and he came up next to me and got a glass as well. We had some small-talk for about a minute. He seems very uncomfortable in general." Well of course, wouldn't you be? You're as homophobic as they come, but all you really wanna do is belt out "Diamonds are a Girls Best Friend" with a bunch of old queens in a piano bar. "The Vice President of the NRA was in our bar last night dancing to the music." (now if ever there was justification for use of a stun-gun...)

Sounds like our nation's leading conservatives are having a gay old time at sea.....


On another note, we could use your help at The The Adrienne Shelly Foundation. We're a 501 c 3 tax-exempt, non-profit organization dedicated in my late wife's honor, and with a simple mission: supporting women filmmakers. Adrienne, who wrote, directed and starred in the hit film WAITRESS, was killed November 1, 2006. Through the Foundation, her commitment to filmmaking lives on. We've established scholarships, grants, finishing funds, screenwriting fellowships and living stipends at NYU's Tisch School of the Arts/Kanbar Institute of Film; Columbia University; American Film Institute; Women in Film; IFP; the Nantucket Film Festival; the Tribeca Film Institute; and the Sundance Institute. Your generous contribution will go a long way towards helping us achieve this very important mission. Please click here to make a donation. Thank you.
Posted by The Ostroy Report at 7:43 AM

All I know is that I am hearing about folks in the south wanting to form a militia so they can go to war with the USA. Didn't they already try that? And how come all through the Bush/Cheyney years our side didn't go around trying to go to war with our own country? What is wrong with those folks? They yell and scream about wanting freedom, but when you take a look at it, it is their view of freedom (theocracy) that they really want. On the other hand, I too want freedom. But I want freedom for everyone not just those who think and look like me. Big difference.

Pardon the shameless blogwhoring, but I've been waiting for someone to report on this and I'm glad it was you. This was too good to pass up! Please go see my take.

Wishing the religious sacrament of marriage not be extended to gay people does not mean they are not liked. And, since we who read and contribute to this blog are very much pro-gay rights and like gay people, why do you think it appropriate to imply that Newt is doing something unseemly?

Those who truly do "read and contribute" to this blog would know that my support for the gay community and for gay marriage has been highly outspoken and unwaivering. Grab a sense of humor and some comprehension skills, will ya? If Newt is doing something "unseemly," it's because he's a hypocrite homophobe. His actions and my beliefs are not connected.
Andy