The Lesson to be Learned from Bernie Madoff 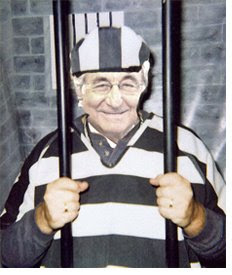 So Bernie Madoff got the proverbial book thrown at him with Judge Denny Chin's 150 year sentence. Madoff leaves us the same way he came onto our collective radar screens: quickly and with grandiosity. But make no mistake. There's another Bernie Madoff waiting to take his place, and another after that, and another after that one. As someone whose wife was murdered, I can guarantee you she will not be the last innocent victim to fall prey to a brutal monster. Unfortunately, when it comes to the pathological and the mentally deranged, the specter of a stiff prison sentence serves as zero deterrent. The streets are littered with evil predators searching for their next victims. It's best we know that and not fall into a false sense of security because, "Phew! Bernie's in jail!"

When it comes to our financial health, what we can learn from the Bernie Madoff tragedy is this: live your life with more street smarts than ever. Don't let the bad guys win, and don't be stupid. Or greedy. Greed will get ya every time. So here's a few simple tips:

1. Never put all your eggs in one basket, no matter how tempting
2. Be leery of investments that continually show gains even in a global economic recession
3. Check your monthly account statements. If they look like they were produced by a high school kid, run
4. Never escort a stranger to the ATM machine to deplete your account so that he can invest the money and make you both rich
5. Never send any money to any "nice fellas" in Nigeria who've informed you through a grammatically-challenged unsolicited email that there's millions waiting for you in Abuja if only you wire them $50,000+ to "release the funds"

By following these few simple rules you will most likely preserve your hard-earned life-savings and reduce the likelihood that, because of unscrupulous scumbags like Bernie Madoff, you'll end up working as a 70-year-old greeter at Walmart.


On another note, we could use your help at The The Adrienne Shelly Foundation. We're a 501 c 3 tax-exempt, non-profit organization dedicated in my late wife's honor, and with a simple mission: supporting women filmmakers. Adrienne, who wrote, directed and starred in the hit film WAITRESS, was killed November 1, 2006. Through the Foundation, her commitment to filmmaking lives on. We've established scholarships, grants, finishing funds, screenwriting fellowships and living stipends at NYU's Tisch School of the Arts/Kanbar Institute of Film; Columbia University; American Film Institute; Women in Film; IFP; the Nantucket Film Festival; the Tribeca Film Institute; and the Sundance Institute. Your generous contribution will go a long way towards helping us achieve this very important mission. Please click here to make a donation. Thank you.
Posted by The Ostroy Report at 8:26 AM

This is exactly why when Bush wanted to privitize Social Security and leave the investing to us, I was not impressed. All I could see was old Aunt Mitilda confused without a clue picking something that sounded good. I have been told by righties, you have to do your homework. Maybe so, but I do not have an economics degree, the time, or the money to pay someone else to help me out on stuff like this. So beware, yes, but how will uneducated folks know who or what they can trust?

6. Do the opposite of what people on TV tell you to do with your money whenever possible.

7. Do the the opposite of what people on TV tell you to do when they claim America's going socialist.

8. If Phil Gramm tells you your financial problems are only "mental" and defends tax cheats that his company protects, sell that stock (UBS)if you're unlucky enough to own it.

9. If his wife, Wendy Gramm, gets a board seat at another company (ala Enron) invest in their competitors.

10. If the Commander-in-Chief tells you to buy stocks days from the generational bottom, do it.

Bernie Madoff's 150-year sentence makes him the Lee Harvey Oswald of the financial scam. His idiotic ponzi scheme has been protected and promoted for decades by Goldman Sachs and its trained, compliant SEC and Treasury Department until such a time as he could be sacrificed to provide them cover. Any bets on how long before he winds up dead in a cell?

I recently heard Oliver Stone convincingly characterize the Wall Street bailout as history's greatest theft since the Pharaohs built the pyramids, but we will be told for years to come that the piker Madoff's harsh sentence - very much deserved - has balanced the accounts.

We must force Obama to eject the public enemies he fosters on his economic team; send the real criminals (Geitner, Summers, Paulson, etc.) to the cooler along with Madoff. Let's wise up and stop giving these crooks absolutely EVERYTHING.

Well, you can now force the government to bring to justice all those that Madoff made all that money for. It's obvious Madoff is just the stooge, because common sense tells you that anything the justice system holds up to the public is no more than a small part of the whole thing.

I know. Why don't you idiots try water boarding him. You made that legal. I'm sure he'd start coughing up all those names you need to get the job done, or is that just for people you need to keep the PNAC afloat.