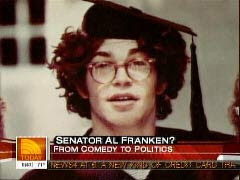 Finally, the state of Minnesota has its second U.S. Senator after an eight-month legal battle following the 2008 election. Al Franken, the former comedian, author and political talk show host, ultimately prevailed over incumbent Norm Coleman in a knock-down, drag-out fight that ended Tuesday in the state's Supreme Court. Franken will join 59 other Democrats next week as the party has its first filibuster-proof majority in thirty years. Of course, it's a great day for Franken, the party, Minnesotans and comedians everywhere.

I remember the 1970's well. Saturday Night Live ruled the day. Franken was one funny (albeit dry, sarcastic and intelligent) dude. But whoever thought that 30 years later he'd become one of the most influential people in the world, holding one of 100 exclusive seats in America's most powerful legislative body? So it got me thinking: who do we have among today's young comic performers who could one day be making law in the Senate's prestigious chambers?

Will Andy Samberg be the first politician to run for U.S. Senator armed with an array of provocative digital shorts starring him and singer Justin Timberlake? Will Sacha Baron Cohen run? And if so, as himself? As Borat? As Bruno? Or what about Jackass's Johnny Knoxville? Think about all the genital-abusing pranks he'd bring to Washington. Just sit back and close your eyes and dream a little. The possibilities are endless.


On another note, we could use your help at The The Adrienne Shelly Foundation. We're a 501 c 3 tax-exempt, non-profit organization dedicated in my late wife's honor, and with a simple mission: supporting women filmmakers. Adrienne, who wrote, directed and starred in the hit film WAITRESS, was killed November 1, 2006. Through the Foundation, her commitment to filmmaking lives on. We've established scholarships, grants, finishing funds, screenwriting fellowships and living stipends at NYU's Tisch School of the Arts/Kanbar Institute of Film; Columbia University; American Film Institute; Women in Film; IFP; the Nantucket Film Festival; the Tribeca Film Institute; and the Sundance Institute. Your generous contribution will go a long way towards helping us achieve this very important mission. Please click here to make a donation. Thank you.
Posted by The Ostroy Report at 9:29 AM

All I know is that the Dems have no excuse but to try and do the people's business which we voted for last November. Even if there are Dems that can not vote for all of the agenda, at least those in the committees should vote to let the bills go to the Senate floor for an up or down vote. I sure hope the Dems get some backbone and finally do the correct thing. There will be hell to pay if they don't.