The Most Incredible Moment from Michael Jackson's Memorial 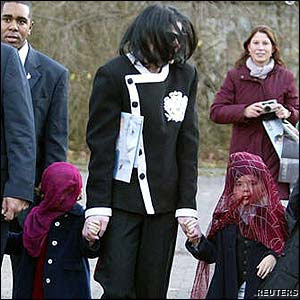 For the past 12 years Michael Jackson paraded his children around the globe like sideshow freaks. What we saw were tiny spectacles shielded under umbrellas and faces hidden by scarves. He dehumanized them at every possible turn. They, like their uber-bizarre, iconic father, became the object of ridicule despite their total innocence. Sadly, the American public barely got a glimpse into these childrens' lives, developed no relationship with them whatsoever, and thus became detached from it all. We certainly never could quite understand Michael's complicated, dysfunctional life, so there was no way we'd understand that of his kids.

But that all changed in one fleeting moment on the stage of LA's Staples Center Tuesday at the outsize, overhyped public tribute to the self-proclaimed King of Pop. Following an emotional rendition of both "We Are the World" and "Heal the World" by the celebrity attendees, the Jackson clan stayed onstage to say their final public goodbyes. The group included Michael's three kids, Paris, 11, Prince Michael 12 and little "Blanket," 7. The children stood nervously amongst the family members as brothers Jermaine and Marlon and then sister Janet shared their grief. It was very touching to see the aunts and uncles demonstrating genuine love, affection and concern for the little ones. At one point during Marlon's tear-filled send-off, Janet hugged Paris tight, leaned in to ask how she was, and then grabbed her hand and held it in hers in such a gentle, supportive way only a loving auntie would do in such an emotionally difficult moment. Paris then leaned her head into Janet's body, looking for and finding the safety she so desperately needed. No matter what I've felt over the years about Janet and the rest of the kooky Jacksons, I will never forget that image of genuine love and tenderness for that little girl who must've been going through a living hell trying to reconcile the sudden death of the only parent she's ever known, while having to do so amid the circus-like atmosphere.

And then in a very surprising moment, Paris chose to speak. She stood in front of the mic and immediately began to break down. As she sobbed uncontrollably, she somehow managed to muster up all the courage a grieving 11-year-old could under the circumstances and said , "I just want to say, ever since I was born, Daddy has been the best father you could ever imagine, and I just wanted to say I love him. So much." It was a totally unscripted, and terribly sad moment, and one would have to be heartless not to have been moved to tears.

I stood mesmerized by that incredibly powerful, gut-wrenching moment. Feeling so sorry for these now motherless and fatherless children. These heretofore mysterious Jacko kids at once became very human and real. Looking and sounding just like every other normal kid who just tragically lost a father they so clearly loved dearly. And it painfully reminded me of my own little girl, for whom I had the unbearable task almost 3 years ago of telling at the tender age of 2 1/2 that her mommy was never coming home again after having been brutally murdered. Brought back a lot of awful memories. No child, or parent for that matter, should ever have to experience such sadness and grief. And shock. I'm not only "daddy" to my little one, but to three older children as well. I can't bear to think about how my sudden, premature death would affect my children. Today, after all the hoopla...after all the singing, the speeches, the Al Sharpton theatrics...when the curtain on this circus was about to come down, all I wanted to do was simply hug that poor little girl and tell her everything was going to be ok. I truly hope, that for her and her siblings, it will be. It's certainly going to be quite an uphill climb.
Posted by The Ostroy Report at 10:32 PM

I hate the footage of Michael Jackson dangling the baby over the balcony. Why did he do that? Who didn't fear for the safety of that child?
Yet I never thought he was guilty of sexual abuse. I thought he was scapegoated the same way Pee Wee Herman was scapegoated.
That Republican senator Pete King considers it his civic duty to harass Michael Jackson, even in death, and to condemn and insult him publicly, as Jackson's children try and come to terms with their loss.
I wonder if Pete King thinks Jackson's kids are better off without a father?
I don't want to know what insensitive things he or Rush or O'Reilly have to say about the Jackson memorial.
Paris Jackson's tribute to her father will be remembered. Yes, it took air time away from more important stories like Iran, Afghanistan, China, etc. but the sight of that kid choking up, so clearly heartbroken, just saying "I love him so much" and then clinging to her aunt.
Paris Jackson's got her whole life ahead of her, and is clearly a loving, sensitive person.
Pete King is a fat creep who no one will miss much after he's gone.

Andy,
As a reader of your blog, I had no idea you even had children. I don't remember you ever talking about them until now. You certainly know what it is like to be both father and mother.
My heart aches for the Jackson kids. I fear that they will be taken away from the only family they know (Jacksons) and be given to the mother they don't know at all.
Finally, Michael was one tremendous talent, but for those of us who have watched him all these years, he appeared to be a totured soul too. His death brought back all his wonderful music that I had forgotten. RIP

So tenderly written.... Your princess is a lucky girl to have you as her daddy!

Why do you ahte it. you ahve no clue he was holding that kid tight for his fans to see as they were shouting where is the baby. Fans in Germany loved and still love MJ . Mj would never hurt a baby. His haters think he was a luantic we his fans know he was the most wonderful person the world will ever know besides Jesus sorry. We love Mj and whether you ahte him or not the overwhelming love he was shown by his fans and fmaily during the infamous 2005 triala nd the outpouring of love for the last four months since he passed on can telll you soemthing. Mj will always be a love to be cherished by us his fans who love him even more and hsi music will live on forever more.