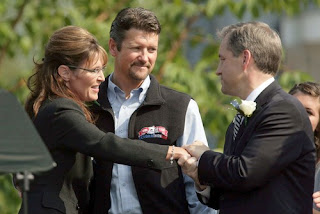 Alaska Gov. Sarah Palin bid a fiery farewell Sunday amid a legion of supporters, thus ending The Fairbanks Follies, the most bizarre chapter in U.S. political history. Where she goes from here is anyone's guess. But if the conspicuous absence of coverage in Monday's NY Times and Wall Street Journal is any indication, no one really cares.

In her semi-angry, condescending 15-minute speech, the self-proclaimed maverick pulled no punches with her detractors. Of the media she said: "You represent what could and should be a respected, honest profession that could and should be a cornerstone of our democracy. Democracy depends on you, and that is why, that's why our troops are willing to die for you. So how about in honor of the American soldier, you quit makin' things up." Yer darn tootin' right there, Sarah! You betchya, girl! But if only that were true. Please tell us exactly what the press made up about you, because the way I see it, your reputation for being a vacuous, uninformed, un-curious, un-read, inarticulate political lightweight is 100% factual.

She continued bashing the press: "One other thing for the media, our new governor has a very nice family, too, so leave his kids alone." Well if the new governor shamelessly parades his "very nice family" around like political props they way you did with yours, they'll be up for grabs too.

And as for those amoral show-biz folk: "By the way, Hollywood needs to know, we eat, therefore we hunt!" Yeah, Hollywood, take that...you coke-sniffin', fake-boobin', blasphemous anorexics! (By the way, I was 'huntin' for a nice skirt steak at Gristede's the other day. Does that make me a 'real American' or a Hollywood sleazeball?)

To say Palin is an unpredictable enigma is not enough. She's a walking contradiction. An uber-hypocrite who rails against "government bailouts" but as governor gave every Alaskan $1200 in "energy relief." Kinda hard to paint yourself as a role-model for small-government when your populist moves result in a $741-million handout. That's why Alaskans loved her, temporarily. Her approval rating was a whopping 93% two years ago but has since dwindled to the mid 50's this month. She exits office with a bloated budget, sagging oil revenues, rising unemployment and personal popularity that's hemorrhaging. She can blame Hollywood, the media, Democrats, President Obama, the Bogeyman and whoever else she wants. But she personifies Harry Truman's famous adage, "If you can't stand the heat, get out of the kitchen." She's a quitter. And nobody likes a quitter. Especially sitting in the Oval Office.

While she and the kool-aid drunken, MILF-lovin' Republicans who adore her delude themselves into thinking she's our next president, the rest of us sane Americans know there's not a shot in hell she'd ever make it beyond a GOP nomination, and even that's being generous. She's an empty Versace suit. Style over substance. All smoke and mirrors. And the mirror's gonna get foggier and foggier with each passing day that Palin hits the national stage and opens her mouth. Let's not forget how her woeful inadequacy, cheesy folksiness and obnoxious colloquialisms already derailed one presidential campaign. Now with the word quitter added to her existing unimpressive resume, she's got as much chance of becoming president as I do. I might actually have a better shot...


On another note, we could use your help at The The Adrienne Shelly Foundation. We're a 501 c 3 tax-exempt, non-profit organization dedicated in my late wife's honor, and with a simple mission: supporting women filmmakers. Adrienne, who wrote, directed and starred in the hit film WAITRESS, was killed November 1, 2006. Through the Foundation, her commitment to filmmaking lives on. We've established scholarships, grants, finishing funds, screenwriting fellowships and living stipends at NYU's Tisch School of the Arts/Kanbar Institute of Film; Columbia University; American Film Institute; Women in Film; IFP; the Nantucket Film Festival; the Tribeca Film Institute; and the Sundance Institute. Your generous contribution will go a long way towards helping us achieve this very important mission. Please click here to make a donation. Thank you.
Posted by The Ostroy Report at 7:15 AM

Not just hunting your own food... you need to build your own house, make your own clothes, school your own chillin's, bandage your own knife wounds etc.

I think the GOP can go a long way with the DIY stuff. There are plenty of survivalists out there.

Ted Kaczynski for her Veep in '12.

Andy, whilst I wish you to be right about her political demise, you know that 'down home', the 'folks' really like this show.

"She's one of us," is the Palindrone's mantra (akin to the "He's the guy I'd like to have a beer with" referring to W) these days.

If the economy continues to tank, we might be lookin' at SP as only the latest demogrog to come down the pike in hard times (Think HP Long).

Thanks for the blog. Keep up the good work, sir.

Brilliant!
As always, thank you for your blog which has been a comfort to me many times when I find myself thinking that nobody gets it.

sarah palin is just like bush....she left her state in shambles....w's record was so bad,that his texas record as governor is SEALED.......oh yeah,only 6% of a fox news poll thinks she's presidential material............obama's got this ! they have only spent 57 billion of the 787 billion recovery act.......the trap is about to sprung on all the naysayers....obama is KICKING GOP ASS ! FAIR AND SQUARE !

Good riddance. We haven't seen/heard the last of her though. She'll be maneuvering into position to run for POTUS in 2012.

If Palin is such a loser, why do you guys on the Left obsess over her? Why even have this post? This obsession is quite bizarre.