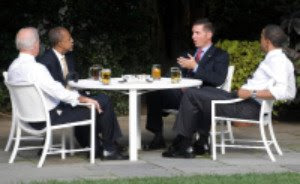 Ya gotta love America. Two weeks ago, when Police Sgt. James Crowley and Harvard Prof. Henry Louis Gates Jr. were screaming at each other like Archie Bunker and George Jefferson, I'm fairly certain the last thing either man thought at that racially-charged moment was that they'd soon be sipping beer together and yukking it up in the White House Rose Garden with President Barack Obama and Vice President Joe Biden. But that's precisely what they did this week, proving once again that anything can and will happpen in this nutty country of ours.

In a storybook ending worthy of Rodney "why can't we all just get along" King, the Massachusetts antagonists posed in what will go down in political history as the cheesiest, most embarrassing and most gratuitously sensational photo-op ever.

Crowley, after his highly controversial disorderly-conduct arrest of Prof. Gates in his own home, suggested to Obama, after the leader-of-the-free-world said the Cambridge police "acted stupidly," that the three of them get together for a White House brewsky to kiss and make up. A boneheaded suggestion which the president boneheadedly accepted.

With the four men seated at a round table with their frosty mugs of Blue Moon, Bud Light, Sam Adams Light and Buckler's beers, and with Biden and Obama with uprolled sleeves, the picture could not have looked more fake and insincere. What the hell the president intended to get out of this Kumbaya charade is anyone's guess. Neither Gates or Crowley will dislike each other any less, and race relations in America will not be changed one single iota.

That Obama felt the need to inject himself into this non-story and take away precious presidential time from pressing economic and health care matters is beyond belief. For an awfully bright guy who usually has laser-like focus on priorities, this time he's bungled it big time.
Posted by The Ostroy Report at 9:37 PM

If the Gates and Crowleys of the world can sit down and at least talk...isn't that better than the shouting matches we witness on the 'news' shows?

Maybe we don't have to yell. And, to throw in a little kumbaya of my own, "blessed are the peacemakers."

But, agreed; it detracts from the pressing issues. And health care may be D.O.A (Dead on August).

People need labels to give them security.

I guess being a president is about more than signing declarations of war. He got involved, because Gates is his friend and he didn´t want to take sides. Not a bad idea. Drinking Bud Light on the other hand...

I agree. It was a waste of time. Gates set this whole thing up. He knew why the neighbor called. The cops were only answering a 911 call. Gates must have been trying to hide something. But, maybe the Prof's charade will help him sell more books and make a million dollars more.
http://tinyurl.com/SupportOurTroops

I fail to understand why Crowley when presented with Gates identification that proved he was the homeowner did not apologize and back out of the situation. It doesn't really matter how obnoxious Gates was. He was in his own home. If a cop cannot deal with obnoxious people without arresting them they are in the wrong business. Seems to be a poor training issue to me. If I screwed up that bad on my job that I needed the president to call me personally I would move to Antarctica. BTW I am so white my legs glow with a blinding light and people pay me to put some long pants on when I try to wear shorts.

If there is ever a female President; and, if women start committing crimes and are profiled, then there will be the liklihood of a similar gathering at the White House called a "Tea Party Summit."

Who learned what at this "teachable" moment? We probably needed more input from Rev. Wright and Michelle. Perhaps the ACLU should have been represented. Then, a few cops who backed Crowley could have been helpful. This photo-op just didn't "do it."

I'm sorry, but this destructive, hateful, arrogant post leaves me tongue tied except to say - what a stupid, hateful post!

gates and crowley, must read up on who they are. But if they dislike each other as is being said, them talking may help. Is it not better that they two talk rather then the two staying apart and continuing being ignorant of each other. which brings me smartly to 'Ignorance' which is a facet of racism. at least this way that aspect is being tackled over a cool beer.

Good post, Andy. Although distracting President Obama from nationalizing health care is not a bad thing.

The real travesty here is that I've heard no one state what is obvious to me:

Gates, not Crowley, was the one engaging in racial profiling that night.

I can't agree that defusing the problem was a bad thing in itself, but what big story went on that we didn't get to hear about while the Fawning Corporate Propaganda Media lapdogs jostled for position to pick up the fizz in their shotgun mics?

In the continuing rage and hate connected with our history of slavery, why aren't the black African merchants who sold their fellow-countrymen to the white slave dealers included in the blame and hatred at past slave owners and their descendants?