Goldman Announces Record Profit and Bonuses. So Much for Financial Reform and an End to Greed on Wall Street 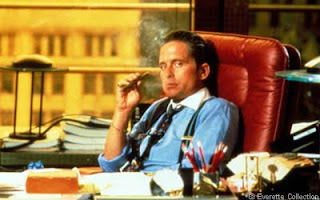 Well, greed is not only good, apparently, it's back, and more ravenous than ever. On Tuesday the venerable Wall Street investment bank Goldman Sachs announced an astonishing $3.4-billion quarterly profit, it's best ever in its 140-year history. It also announced that it's allocated a whopping $11.4 billion towards employee compensation this year. So, just a few months after being bailed out by the U.S. Government and after much public and congressional excoriation over its high-risk trading and excessive compensation practices, this year's bonuses could match or beat the highest ever, while bringing Goldman back into the dicey mortgage and credit game.

"I find this disconcerting," said Lucian A. Bebchuk, a Harvard law professor, as quoted in Wednesday's NY Times. "My main concern is that it seems to be a return to some of the flawed short-term compensation structures that played an important role in the run-up to the financial crisis."

There are some very obvious questions here. How can Goldman turn around its fortunes so fast, going from government bailout to historic profit just two quarters later amid the worst economic crisis the nation has seen in 80 years? Where's the money coming from? After taking taxpayer money to survive, has Goldman returned to the same high-risk trading tactics that could strangle cash-flow should the markets turn further downward? What happened to all the regulation that was supposed to come with government intervention? How is the public to be assured that Wall Street's financial meltdown last Fall won't happen again, requiring even more taxpayer bailouts as the industry demonstrates an inability to tame it's voracious appetite for massive payouts derived from unsound banking practices?

Goldman received $10-billion last Fall in TARP bailout funds. How about this: next time they experience a cash crunch, rather than receive another government bailout, their employees return their bonus money? Why aren't we passing legislation to ensure that Goldman's highly paid execs, not the American taxpayer, foot the bill of the next bailout? Are we just gonna sit here and watch these greedy fat cats cut themselves massive bonus checks and then cut a check of our own next time they run out of cash? What have we learned from last fall's crisis? What steps are we taking to ensure that there's been true reform and that you, me and every other taxpayer won't have to clean up another colossal mess these reckless cowboys have created? Where does it all stop?

Gordon Gekko: "The point is, ladies and gentleman, that greed, for lack of a better word, is good. Greed is right, greed works. Greed clarifies, cuts through, and captures the essence of the evolutionary spirit. Greed, in all of its forms; greed for life, for money, for love, knowledge has marked the upward surge of mankind."

To be sure, greed is alive and well on Wall Street.


On another note, we could use your help at The The Adrienne Shelly Foundation. We're a 501 c 3 tax-exempt, non-profit organization dedicated in my late wife's honor, and with a simple mission: supporting women filmmakers. Adrienne, who wrote, directed and starred in the hit film WAITRESS, was killed November 1, 2006. Through the Foundation, her commitment to filmmaking lives on. We've established scholarships, grants, finishing funds, screenwriting fellowships and living stipends at NYU's Tisch School of the Arts/Kanbar Institute of Film; Columbia University; American Film Institute; Women in Film; IFP; the Nantucket Film Festival; the Tribeca Film Institute; and the Sundance Institute. Your generous contribution will go a long way towards helping us achieve this very important mission. Please click here to make a donation. Thank you.
Posted by The Ostroy Report at 8:12 AM

"$3.4-billion quarterly profit... It also announced that it's allocated a whopping $11.4 billion towards executive bonuses"

Isn't this a typo? maybe 11.4 million towards bonuses?