How to Fix the U.S. Auto Industry 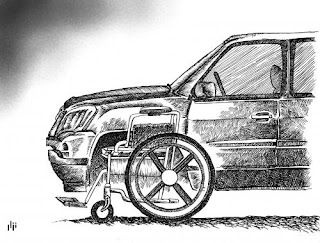 I own a marketing business. In many ways, we're all marketers. As marketers, the goal is to create products and services that consumers will want to buy. And therein lies the number-one problem with U.S. automakers: no one wants the cars they're manufacturing. The problem isn't the cost of labor, which many would like us to believe, though it's easy to play the union straw-man game here.

True, on first glance, car-manufacturing costs here in America appear much higher than the foreign competition. There's this myth that American autoworkers are paid $70/hour in wages and benefits (for health care and retirement) versus an average of $48/hour for employees of Toyota, for example. But, what this $70/hour statistic doesn't tell you is that it also includes retirement and health-care benefits for current retirees, unlike Toyota's figure, and when that's backed out, the hourly cash compensation and benefits cost drops to below $40/hour for companies like General Motors. There's the strong argument to be made, therefore, that U.S. autoworkers work as cost-efficiently, or even more so, as their foreign counterparts.

To be sure, Detroit's problem is not the autoworker, and it's not the unions. I've been driving Fords for years and they are built solidly and run great. I'll stack up a Ford Focus to any similarly priced foreign car any day. The autoworkers have done their jobs. It's the executives who have failed miserably. Disappearing ingenuity, poor design and dreadful marketing is to blame, not the poor shlep who toils on the assembly-line for eight hours a day. Fix these problems and you'll have a much healthier, more competitive, and more profitable U.S. auto industry.

Easier said than done, right? Granted, I do not profess to have all the answers. It's taken GM, Chrysler and Ford decades to screw things up, so it's safe to say that (a) identifying the underlying problems and (b) finding the cures will take some time as well. But there are some things that truly appear to be low-hanging fruit:

1. Go Retro: what happens every time Detroit rolls out a slick, sexy throwback like the Mustang, T-Bird or PT Cruiser for example? Consumers love it. The problem with cars today is that they all look the same. Big boxy things, medium size boxy things, and small boxy things. I think back to the 60's and 70's, and how each model had its own style, design and individuality. They had curves and contour and were sleek and sexy. So sexy, some of them, that you'd just slowly walk along the side and run your hand along body. Who the hell wants to do that today with any of these homely boxes? Back in the day, you could easily identify any make and model from a block away. Today they're all indistinguishable from each other. They've become commodities.

What should Ford's Mustang success tell us? That perhaps it's time to give consumers more exciting, nostalgic options. Perhaps a retro '72 Lemans. Or how about a '64Corvette, '68 Corvair, '72 Gran Torino or '69 Camaro? I bet these models would fly out of the showroom. And as a marketing ploy they could roll out just one or two new retro models per year, built around a massive, attention-grabbing PR and ad campaign. They could do the same with retro pick-up trucks and other specialty vehicles like the classic "country-squire" station-wagons (complete wih wood-panelling) and the El Camino.

2. Make U.S. Luxury Cars Status Symbols Again: when I was a kid, rich folks bought Cadillacs and Lincoln Continentals. If you owned a "Caddy" everyone knew you had made it. What Cadillac needs to do today is embark on a branding campaign that can achieve for its luxury sedans what it has done for its Escalade, which has become the uber-chic vehicle for rappers, playboys, rich businessmen and limo fleets. If you can succeed in making one Cadillac brand sexy and desirable and a true status symbol, it can be done for the others.

4. Give the Hot New Vehicles to A-List Celebrities: Wanna sell thousands of a sexy new model? Identify pop-culture's trend-setters, across all demographics (i.e Britany Spears, Jennifer Aniston, Leo DiCaprio, Beyonce, Jay-Z, Angelina Jolie, Carrie Underwood), and give them free cars to drive around Hollywood....and then make sure they get photographed in them.

5. Create a Massive "Buy American" Campaign: for Pete's sake, Americans are the most patriotic people in the world. Give 'em a reason to raise the flag and they will. Detroit has been woefully impotent in rallying consumers to its "made in the USA" vehicles.

6. Create a Hot American-Made Hybrid: Why has Detroit let Toyota dominate this market with its Prius? Americans buy hybrids to be "green" and energy efficient and, quite frankly, because it's hip and cool to have one. These same people I'm sure would love to buy American as well.

It's time to truly shake things up in Detroit if the U.S. auto industry is going to survive and thrive going forward.


On another note, we could use your help at The The Adrienne Shelly Foundation. We're a 501 c 3 tax-exempt, non-profit organization dedicated in my late wife's honor, and with a simple mission: supporting women filmmakers. Adrienne, who wrote, directed and starred in the hit film WAITRESS, was killed November 1, 2006. Through the Foundation, her commitment to filmmaking lives on. We've established scholarships, grants, finishing funds, screenwriting fellowships and living stipends at NYU's Tisch School of the Arts/Kanbar Institute of Film; Columbia University; American Film Institute; Women in Film; IFP; the Nantucket Film Festival; the Tribeca Film Institute; and the Sundance Institute. Your generous contribution will go a long way towards helping us achieve this very important mission. Please click here to make a donation. Thank you.
Posted by The Ostroy Report at 7:53 AM

Andy; Are you aware of the new moderation warning being posted on selected pieces on HuffPo,and what do you think of it.
Your latest piece has been so designated.