Hey Republicans, Can You Answer These Questions Truthfully About the "Obama Economy?" 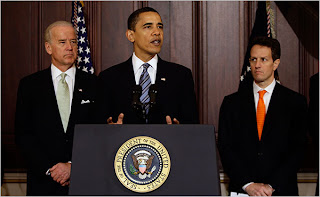 The Republican party's love affair with former President Ronald Reagan took on Mark Sanford-like Argentinian proportions after eight miserable years of George Bush. To conservatives today, Reagan is God. To Democrats, he's an overrated myth who tripled the deficit and doesn't deserve the hype. But, he was a masterful politician who brilliantly asked Americans during a 1980 televised debate with then-incumbent Jimmy Carter, "Are you better off than you were four years ago?" The rest is campaign history.

With the country still reeling from the impact of the worst financial crisis not seen in 80 years, perhaps it's time that that other masterful politician, President Barack Obama, defend his nascent administration's fiscal policies by revisiting and re-phrasing that legendary question: Is the economy stronger now than when Bush left office? It's a really simple question, and one that cuts right through the rampant partisan rhetoric polluting the airwaves today.

So here's a little test for our Republican friends to help them decide the status of the nation's economy. I dare them to answer these questions truthfully, as Americans first, and not as transparent partisan stooges:

Of course, the answer to every single one of these black and white questions is yes. Conclusion? It's abundantly clear that President Obama's stewardship of the economy has resulted in tremendous improvement from the near-abyss the nation fell into last Fall at the end of Bush's presidency. While Republicans can vehemently criticize Obama's stimulus plan and disingenuously declare its failure all they want, the facts speak for themselves.

Nice work, President Obama. Keep it up. While Republicans may never thank you, their businesses, jobs, homes and savings will.


On another note, we could use your help at The The Adrienne Shelly Foundation. We're a 501 c 3 tax-exempt, non-profit organization dedicated in my late wife's honor, and with a simple mission: supporting women filmmakers. Adrienne, who wrote, directed and starred in the hit film WAITRESS, was killed November 1, 2006. Through the Foundation, her commitment to filmmaking lives on. We've established scholarships, grants, finishing funds, screenwriting fellowships and living stipends at NYU's Tisch School of the Arts/Kanbar Institute of Film; Columbia University; American Film Institute; Women in Film; IFP; the Nantucket Film Festival; the Tribeca Film Institute; and the Sundance Institute. Your generous contribution will go a long way towards helping us achieve this very important mission. Please click here to make a donation. Thank you.
Posted by The Ostroy Report at 7:05 AM

Senator Jim DeMint, (R-SC), Made the GOP strategy crystal clear a couple of days ago when he said this about the Obama push to overhaul healthcare;

"If we're able to stop Obama on this, it will be his Waterloo. It will break him."

Proof that the GOP is more interested in bringing down the President than doing what is right for Americans.

Are Seniors better off than when Bush left office? NO

Interest rates on their savings was five percent under Bush.

Is Obama's health plan going to help seniors? NO

He will rob Medicare to pay for the uninsured and seniors will not get needed medical attention because of their age.

So what you are saying is that if JP Morgan and Goldman Sach are riding high because they looted our tax money - that means I'm better off. Oh I just didn't understand that before. Or that GM is doing better not because they are making decent competitive cars but that they also looted massive amount of tax money, means I'm doing great and my children will never have to pay this. Thank you for enlightening me!

You have GOT to be on crack to think the answers to those questions are "yes".
Wow!

Unfortunately some bloggers still think there is an even minute difference between the left and the right. Ridiculous!

Obama's head of health & human services signed a document making government and pharma cos immune from lawsuits, you know, from the upcoming mandatory vaccinations for the bogus swine flu?

When the bloggers cease believing there is a difference between the right & left we will see true change, until then we'll just see more of the same.

I'm sorry, Andy, but despite having a great deal of respect for Candidate Obama, I have to disagree that President Obama has been doing the job. Sure, the banks as clearly better off, but unemployment continues to rise. States are continuing to cut their budgets by eliminating jobs and services. Ohio is cutting off its future to spite its present by disallowing financial aid to career college students.

The public is certainly noticing that Goldman Sachs and JP Morgan are flush in the plush while we on Main Street are just getting flushed in a rush. Polls are beginning to reflect a serious decline in Obama's public approval ratings, and columnists across the spectrum (see: David Brooks and Ted Rall, et al.) are presenting their cases for why Obama is failing. I find few reasons to disagree with any such evaluation I've read so far regardless of the source.

Don't get me wrong on this. I want Obama to succeed. But the time for him to do so grows short while his odds of keeping a Democratic Congress past 2010 lengthen. He either begins to make noticeable progress with Main Street's issues like jobs and financial security (which includes health care) or he's gone. The patience of Americans isn't going to last unless these changes can be seen.

No kidding Dick Tracey, it has been totally obvious since Obama won the election that republican intentions were to bring him down. They are the party of NO. And when they add ammendments to a bill, they still vote NO in the final run.

Obama has been in office 6 months and has accomplished a lot in that time and he's done it in spite of the spiteful party of NO. Bush left the economy in a death spiral. To stop that spiral is not an easy thing to do. It took Bush 8 years to get our economy into a death spiral and if you expect one man to reverse it in 6 months it would demonstrate nothing but clear cut intolerance of the man.

yeah,yeah all you naysayers.....you are just mad that obama is kicking he republicans butt.....and to boot he's BLACK ! only 57 billion of the 787 billion stimulus moneu has been spent.....he's been in office for what about 200 days.....EVERYBODY CHILL THE FUCK OUT....HE'S GOT THIS ! james lewis north carolina

I don't know what statistics were used to calculate the answers, so I can't say for sure on any of them if we are better off or worse off. But I can say with certainty that the Republicans' deregulation of corporations was disastrous, so reform and oversight are steps in the right direction. A company free to do anything is like a dog with an endless amount of food, it will eat until it is sick, or possibly until it's stomach rips open and it dies. Power corrupts, and absolute power corrupts absolutely...

I didn't think I actually needed to present data to support the "facts" that I listed in my piece. Apparently many folks don't follow the economic news as I expected. A simple google search of any of the above areas/metrics and anyone can see quite quickly that I'm correct in making these statements.

That said, I'll point ya in the right direction and give you a little head start:

Facts, people, facts. Only a Republican would embarass himself by laiming things are not better today that 6 months ago.

Some of you obviou8soy believe all is well in our country and under Obama things will get better. That is, if you're not a senior. The latest is that seniors, under Obama's plan, will not get treatment because they are going to die soon and are no longer useful to "the government." and require too much money to heal them.

And, the idea that soldiers shouldn't smoke will be extended to the entire population by "the government."

Give me FREEDOM from governmnet rule and tyranny.

I am not understanding Obama's hostility toward seniors. They are at this time thirty percent of the population and should have someclout. Maybe his proposed medical mistreatement is just pragmatic. If at 65, say, seniors are no longer entitled to life-saving proceudres under his health reform plan, it will probably save millions of dollars in social security benefits because of the early demise of enrollees.

Nor do I understand his love affair with people in our country who have broken the law by entering illegally. They, instead of life-long American citizens will be entitled to health care under his plan.

I'm waiting to hear how he regards infants born with defects that will require life-long medical expense.

So many questions -- so few answers

Hows that deficit, hows that unemployemt rate...at least it didnt go above 8%....ooops, nevermind. Boy, mortgaging our childrens future sure had paid off.

Higher educatuion (that actually includes more that learning the inverted pyramid) - try it.

Geez...what does it say when America's worst president, Bush, had higher approval ratings than OBama at the same time of their respective terms?

Great questions about the economy!

Is unemployment higher than when Bush left office? YES