Sarah, We Hardly Knew Ye. Some Suggested New Jobs For an Ex-Maverick 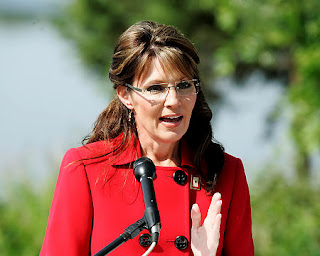 She literally came out of nowhere. She blew onto the American stage with the speed and notoriety of British singer Amy Winehouse, without the booze and rehab but with the same self-destructive flair. She's been called dumb, vacuous, uninformed, inexperienced, underqualified, embarrassing and a joke. Now add quitter to that impressive list of credentials. The key question now is, do Republicans still consider her the future of their party? Gee, I really hope so.

The most famous MILF in America, Gov. Sarah Palin of Alaska, abruptly and with great fanfare, announced Friday that she's resigning from the job she was elected to just three years ago. Just like that, a year early. Adios America, I'm outta here. Obviously, a firm believer in the Truman Doctrine: "If you can't take the heat, get out of the kitchen." The former vice presidential candidate who faced massive challenges and ridicule over her glaring lack of political experience just quit the only prominent political job she's ever had. This stunning 'maverick move' certainly won't bode well in a much-speculated 2012 presidential run, as some are hinting is part of Palin's convoluted master plan.

In a long, rambling statement, Palin said"...I thought about how much fun some governors have as lame ducks...And then I thought – that’s what’s wrong – many just accept that lame duck status, hit the road, draw the paycheck, and “milk it”. I’m not putting Alaska through that – I promised efficiencies and effectiveness!...I’ve determined it’s best to transfer the authority of governor to Lieutenant Governor Parnell." So let's get this straight: you don't wanna be a lame duck Governor because that'll be bad for Alaska, but you believe it's more "efficient and effective" for Alaska to now be run by a lame-duck Lt. Governor. Well Sarah, at least your political gobbledygook is consistent.

When normal English language became too complicated for Sarah she offered us this: "Let me go back to a comfortable analogy for me – sports… basketball. I use it because you’re naive if you don’t see the national full-court press picking away right now: A good point guard drives through a full court press, protecting the ball, keeping her eye on the basket… and she knows exactly when to pass the ball so that the team can win. And I’m doing that – keeping our eye on the ball that represents sound priorities – smaller government, energy Independence, national security, freedom! And I know when it’s time to pass the ball – for victory." What the fuck is she talking about!? To quote my all-time favorite comedian Richard Pryor from a brilliant early routine about The Exorcist: "Is the girl crazy?"

Sarah Palin's time in politics has been a train-wreck worthy of reality television. She's been investigated for abuse-of-power charges. She's spent $150,000 on clothes during the campaign. She defended her daughter's unwed-teen pregnancy as if it was some sort of cool conservative virtue. She's claimed to see Russia from her backyard. She could not name one newspaper or magazine she regularly reads when interviewed by Katie Couric. Most recently she's humiliatingly duked it out publicly with David Letterman. This is a woman who some would like us to believe can lead America in times of war, terrorism and global economic recession? Equipped to be Commander-in-Chief? To be our chief diplomat? I think not. And while we're at it, how she ever got her existing job is a fucking mystery. She makes George W. Bush appear downright cerebral.

To be sure, despite that the GOP might bizarrely continue to view Palin as their savior, she's no Elizabeth Dole, Carly Fiorina, Meg Whitman, Kay Bailey Hutchison, Christine Todd Whitman, Olympia Snowe, Susan Collins or Condoleeza Rice. These are all brilliant thinkers and deft politicians. So here's my suggestion for Sarah Barracuda (her old high-school basketball nickname): stay out of politics. There are plenty of other jobs to excel in and better suited for someone with your skills and personality: flight attendant, librarian, cocktail waitress, nanny, personal shopper, Alaska tour guide to name a few. You can probably even become bigger than Sean Hannity and Rush Limbaugh if someone gave you a daily radio show.


On another note, we could use your help at The The Adrienne Shelly Foundation. We're a 501 c 3 tax-exempt, non-profit organization dedicated in my late wife's honor, and with a simple mission: supporting women filmmakers. Adrienne, who wrote, directed and starred in the hit film WAITRESS, was killed November 1, 2006. Through the Foundation, her commitment to filmmaking lives on. We've established scholarships, grants, finishing funds, screenwriting fellowships and living stipends at NYU's Tisch School of the Arts/Kanbar Institute of Film; Columbia University; American Film Institute; Women in Film; IFP; the Nantucket Film Festival; the Tribeca Film Institute; and the Sundance Institute. Your generous contribution will go a long way towards helping us achieve this very important mission. Please click here to make a donation. Thank you.
Posted by The Ostroy Report at 7:41 AM

Hey liberal straight guy, you sound much more like an uptight closeted gay republican if ya ask me. As my 17 year old son would say, chillax, dude. And yes, I have three daughters. Thankfully, none will turn out to be a narrow-minded, vacuous, mean-spirited twit like Sarah Palin. And for the record, straight-liberal-guy, if you want to make sexism accusations about Sarah Palin, start with Sarah Barracuda herself. Ya think she got her TV sportcaster job because she has a journalism degree? Ya think McCain picked her as his running mate because she really was the most capable Republican choice? Think about that for a sec...